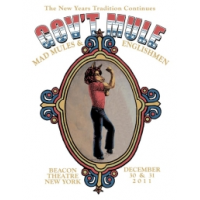 Trumpeter Miles Davis and singer Joe Cocker have in common covering songs by popular peers, transforming those songs, making them their own and in doing so, putting themselves on the musical map forever. Davis did this with his performance of Thelonious Monk's "'Round Midnight" at the 1955 Newport Jazz Festival, a performance that helped him transition from Prestige to Columbia Records (and from heroin to some semblance of sobriety), producing his masterpiece 'Round About Midnight (Columbia, 1957) with his first great quintet. Cocker did nominally the same thing with a Beatles throwaway given to Ringo Starr to sing on Sergeant Pepper's Lonely Hearts Club Band (Parlophone, 1967). When Cocker took the stage at Max Yasgur's farm at 2:00 pm, Sunday, August 17, 1969 and sang "With A Little Help From My Friends," he gave the definitive reading of that song, a quantum greater than the original, and made it more his than any other song he covered (and which can be heard on Joe Cocker and the Grease Band Live at Woodstock (A&M, 2010)).

For Cocker, that was only the beginning of an 18-month creative period that produced With A Little Help From My Friends (A&M, 1969) and Joe Cocker! (A&M, 1969) and ultimately Cocker's residency at New York City's Fillmore East, Easter Weekend, 1970. That concert series employed what seemed to be a band of millions and keyboardist Leon Russell bassist Carl Radle and saxophonist Bobby Keys. The result was the big, bad, shaggy, wet dog of a music revue called Mad Dogs and Englishmen (A&M, 1970). Originally not well received critically, Mad Dogs and Englishmen is generally accepted as one of the great live recordings and a "classic" rock track today.

This brings us to Gov't Mule on the eve of 2012. Following the lead of the band Phish, who began (approximately) yearly coverage of a famous "classic" album in concert, typically on Halloween beginning in 1994 with The Beatles' White Album (Apple, 1968). Gov't Mule began a similar tradition on Halloween and/or New Year's Eve with a covers from singer Otis Redding's In Person at the Whiskey-a-Go-Go (Atco, 1968) on New Year's Eve, 2005. Since then, the band has either performed concerts of mostly covers or complete albums, the most recent being The Who's Who's Next (Decca, 1971), at their Halloween concert, 2010. In 2011, finally gaining proper traction, the Mule takes on Joe Cocker's albatross, doing it more than proud.

Like Phish, the Mule has migrated to three-set shows, where the classic album in question is performed in the middle section. Gov't Mule: Mad Mules and Englishmen proves no exception. The actual concert was covered by Doug Collette in his concert review of the show, where he observes, "Though the theming of the Gov't Mule NYE nights is now customary, they've rarely picked [a classic rock album] so appropriate to the occasion." Indeed.

The Mule's first set was highlighted by a seamless performance of the Grateful Dead's "St. Stephen" segueing directly in to John McLaughlin's "Eternity's Breath" and then into its own "Trane." Guitarist and vocalist Warren Haynes has chops to spare and no fear whatsoever for what material to cover. The cover set began with an extended introduction, featuring the Chronic Horns (trombonist Buford O'Sullivan, trumpeter Pam Fleming and saxophonist Jenny Hill). A crisp treatments of "Honky Tonk Women" and a searing "Sticks and Stones" follow. Haynes is in excellent voice for this material making this performance perhaps the best fit of all the Gov't Mule covers. "Let's Go Get Stoned" detonates like a rolling atom bomb only to drag in the middle with hippie blather. It still comes off extra fine.

For either Phish or Gov't Mule, it seems it is the filler songs that get the best coverage. "Cry Me A River" and "Give Peace a Chance" rock hard. The centerpoint is Cocker's problematic Blue Medley ("I'll Drown in My Own Tears/When Something's Wrong With My Baby/I've Been Loving You Too Long"). Here Haynes summons not only Cocker, but Ray Charles and Otis Redding before him, while showing off the R&B vibe he used on his solo recording Man In Motion (Stax, 2011). It is both tighter and and more dense that the original. "Space Captain" has become the new Jam Band anthem and The Mule does it proud.

It is the demographic of "those of a certain age" (45-65 years) that these concerts most appeal to, those people who were adolescents and young adults in the early 1970s. In the case of Joe Cocker, this was bridge music between African-American and blue-eyed soul. It took England to properly introduce us to our music that was here all along. Gov't Mule is respectful in this tradition: knowing from where they come and to where they are going.

Tracks: CD1: Railroad Boy/Mule; Thorazine Shuffle; Brighter Days/Like Flies; Lay Your Burden Down; About to Rage; Slackjaw Jezebel. CD2: King's Highway/St. Stephen Jam/Eternity's Breath/Trane; Introduction; Honky Tonk Women; Sticks and Stones; Cry Me A River; Bird on a Wire>New Year's Countdown/Feelin' Alright. CD3: Introduction; Superstar; Let's Go Get Stoned; Blue Medley: I'll Drown in My Own Tears/When Something's Wrong With My Baby/I've Been Loving You Too Long; Girl From the North Country; Give Peace a Chance; She Came in Through The Bathroom Window; Space Captain; The Letter; Delta Lady. CD4: Sco-Mule; I Believe To My Soul; Soulshine; I Shall Be Released.