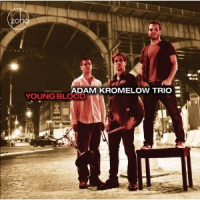 Adam Kromelow's group is a jazz piano trio in instrumentation, but not intent. Kromelow, who originally hails from Illinois and now resides in New York, takes his cues and inspiration from a variety of sources, such as modern classical music, rock sounds and, of course, jazz. All of these influences merge on Youngblood.

While it's tempting—and partially accurate—to say that this exciting new outfit meets at the crossroads of pianist Brad Mehldau and The Bad Plus, that only serves as a very broad reference point. When listening at a deeper level and observing, for example, that Kromelow prefers anthemic rock tides and nuanced grooves over Bad Plus-style bombast, it becomes clear that this trio has synthesized all of their disparate influences and formed their own ideas. They aren't merely regurgitating some hybridized form of music.

Youngblood features nine songs, all in the four to six minute range, which show off the trio's penchant for angst-ridden walls of sound, chromatic angularity, adventurous exploration, and undeniable melodicism. Kromelow's tunes, comprising two- thirds of the program, cover a wide range of styles and ideas. "Black Mamba" is a driving, odd-metered thrill-ride, "Bushido" is a heavy-hitting ode to Kromelow's karate chops and "Upgrade" ends the album in high spirits, with rock-like energy and zest.

His other originals—"Mojo," "Undercurrent" and "Mr. Pokey"—have a greater connection to more conventional jazz ideals, but they are hardly mundane or paint-by-numbers performances. Angular piano ideals set "Mojo" in motion, but a bluesy patina comes to cover the piece. Bassist Raviv Markovitz and drummer Jason Burger both demonstrate extreme dynamic sensitivity on this number, as they bring things down to a pianissimo whisper before launching back into swinging form. "Undercurrent," which gives Markovitz an opportunity to step out with some fine solo work, and "Mr. Pokey" prove to be fairly mellow and help to show off the communicative dynamic between all three men.

The other third of the program, devoted to the music of Thelonious Monk, The Beatles, and Peter Gabriel, gives Kromelow an opportunity to recast these classics in his own image. He uses an "if it ain't broke, don't fix it" mentality on "Across The Universe," delivering the melody in common fashion as Markovitz provides a pulsing foundation. Gabriel's "Mercy Street," likewise, begins with melody as the focus, but a heady rhythmic force takes hold as the music develops. Monk's "Brilliant Corners," the only jazz classic on the program, is dissected and infused with some free play, as the trio gives the piece a dramatic arc with their new ideas and avoidance of the melody until the end.

Pianist Jason Moran has been taken with Kromelow's work, complementing the pianist by saying: "He demands my attention when his hands are at the piano." It's easy to see why. Kromelow is the real deal and, as he develops from a young blood into a seasoned veteran, he'll be one worth watching.