By IAN PATTERSON
March 8, 2014
Sign in to view read count 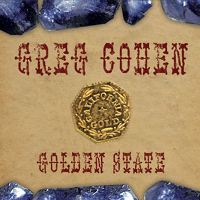 Though best known for his twenty-plus years in saxophonist John Zorn's Masada, bassist Greg Cohen's career has been marked by the diversity of his collaborations, from the carnivalesque Tom Waits and folkster Donovan, to rocker Lou Reed and saxophonist Ornette Coleman. So, in guitarist Bill Frisell—himself no stranger to experimentation—Cohen has found a most simpatico partner. Inspired by the nature and landscapes of California, Golden State draws certain parallels to Frisell's Big Sur (Okeh, 2013), on an emotive level at least. However, where Frisell's tribute was built upon a contemporary chamber aesthetic, Cohen's stripped-down approach has a greater roots-based simplicity reflected in the no-rehearsal, one-take manner of this recording.

The sunny lyricism of "Old Gravenstein" sets the bar high from the outset. Frisell takes lead melodic duties while Cohen injects rhythmic impetus, but in truth their lines are but two interweaving threads of the same chord. A noodling warm-up introduces "Benitoite Blue," but the duo soon settles into a blue-toned ballad as elegant as the Californian gemstone that inspired the song. Cohen's probing rhythms fire Illinois Jacquet/Sir Charles Thompson's much-recorded "Robbin's Nest," as Frisell caresses the melody with a sense of playful familiarity. The gently meandering melody of the curiously titled "Beheading Your Way" provides the simplest yet arguably most intimate dialog of the set.

Cohen's dancing bass heralds the Mexican-tinged "South of the Border," Jim Kennedy/Michael Carr's 1939 song from the movie of the same name. Frisell carries the tune with his habitual controlled invention, while Cohen is equally creative in a supporting role. Cohen's "Fino Mornasco" has all the hallmarks of a jazz classic in the vein of "Softly As in Morning Sunrise," with the bassist moving deftly in Frisell's spaces. "Serverino" is Cohen's homage to Frank Serverino, drummer with guitarist Joe Pass, bassist Ray Brown and singer Sarah Vaughan amongst others; it's another strong tune that balances groove, melodicism and fine, sinewy improvisations, and it follows on nicely from "Fino Mornasco."

The duo has a spring in its step on "California Here I Come," written in 1921 by Buddy DeSylvia, Joseph Myer, and Al Jolson and declared the official state song of California in 1988. Cohen takes his most extended solo of the set but the charm of the tune resides in the independent yet closely related lines of the duo. The bassist is also in expansive mood on the tuneful "Santa Susana," a casual set closer that celebrates the curious majesty of a simple melody.

Cohen has crafted a laid-back, seductive ode to his childhood stomping ground, one that is heartfelt and gently upbeat. Frisell, for his part, is in supremely relaxed yet fluid form throughout, in a rare outing minus his trademark loops. In tandem, Cohen and Frisell make merry in a compelling demonstration of the art of the duo.