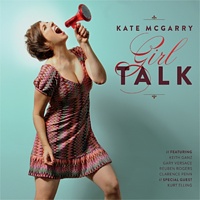 While the world has no shortage of fine female singers, few have the musical depth, sense of passion and artistic ambitions of the divine Kate McGarry. It's doubtful that any other jazz singer could convincingly cover The Cars, weave their way through pianist Fred Hersch's take on Walt Whitman's Leaves of Grass, and triumphantly match wits, wisdom and sounds in the vocal super-group known as Moss. She even managed to transfix a discerning 2011 Newport Jazz Festival audience during a monsoon-like storm while singing with John Hollenbeck's Large Ensemble.

McGarry's public labeling as a "jazz singer" is almost laughable, not because she isn't one of the best in this arena, but because she has spent so much time painting on the peripheries of jazz that she's actually redefined what it means to be one. Her ability to set trends by avoiding them has made her a role model and with Girl Talk she pays tribute to some of her influences.

This album marks McGarry's return to relatively straight-forward territory, but she always has a few tricks up her sleeve and the overriding concept here can be counted among them. She honors the memory of strong women of song such as Anita O'Day, Betty Carter, Sheila Jordan and Carmen McRae by twisting the sexist undertones within some of this music into feminist-worthy flights of brilliance. The prime example is the title track, which McGarry refashions with off-the-cuff, tough girl nonchalance. Other subtle occurrences can be heard throughout.

ADVERTISEMENT
She swings with style and assurance on a few numbers, but she's far more compelling when singing outside the box. Key examples include "Charade," which she gives a devilish make-over, and "The Man I Love," which floats on an ethereal cloud thanks to Gary Versace's weightless organ work. "We Kiss In A Shadow," performed "in celebration of the time coming soon when people are free to love and marry whomever they choose," takes on a yearning quality that makes it one of the undeniable high points on an album full of artistic peaks, with nary a valley in sight.

One of McGarry's many strong suits has always been her ability to radiate intimacy and that comes to the fore in two particular places. Kurt Elling makes a guest appearance on "O Cantador," giving the two vocalists an opportunity to intertwine in blissful fashion atop a sensitive rhythm section. McGarry jettisons the accompaniment, save for guitarist/husband/producer Keith Ganz, during a hushed and haunting performance of "Looking Back."

While McGarry has clearly spelled out her influences and musical inspirations throughout her career, her artistry has always been marked by an X factor. Words don't do her justice, but she does them justice and then some. Superlatives are attached to every album that has a press release these days, but this one lives up to the hype.