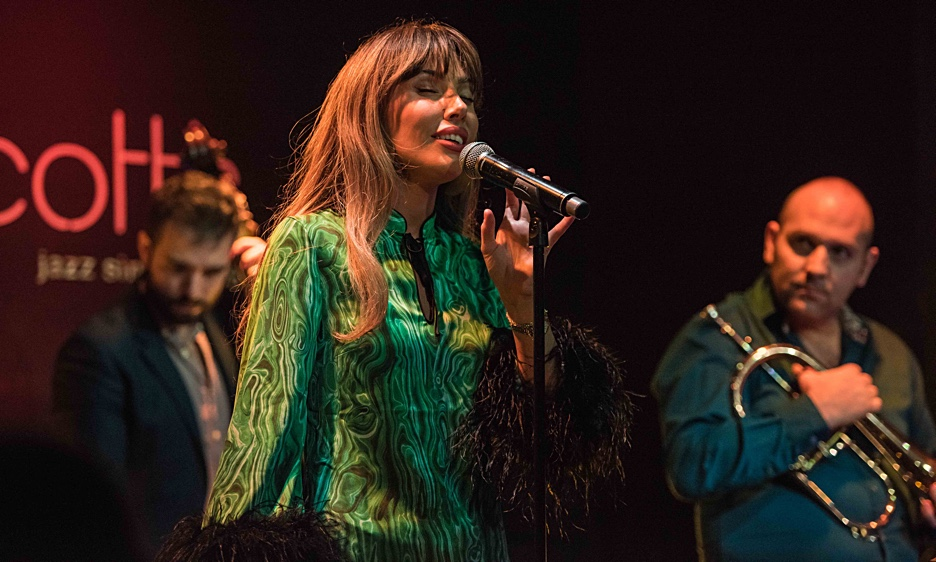 So many men have told me I’ve made their wives cry.
—Georgia Cécile

While Gregory Porter was waiting backstage during his four-night run at London's Royal Albert Hall in October, some friends in the audience texted him: Your support act is dope!

Glasgow-born singer and composer Georgia Cecile is indeed dope, and her talent—developed over the last ten years—is finally being recognized: in 2020 she was nominated in the Vocalist of the Year category in the UK's Jazz FM awards. This year her debut album Only the Lover Sings hit #3 in the jazz chart, after getting regular radio play. Aside from the support slot for Porter, which she was offered only two weeks beforehand, she has just played Ronnie Scott's for the first time. And all this without relocating to London—a move that most regard as essential if they are to move their careers forward.

Until 2018, she was plain old Georgia Smith, and then along came the English r&b singer Jorja Smith. "My songs were starting to get on radio and it was very confusing," she explains. Cécile is her middle name.

To anyone who has already heard her sing, it should come as no surprise that she is winning fans. Aged 29, she has a smoky, controlled vocal style that sounds as if it can barely contain the volcanic emotions seething beneath the surface. There is neither ego nor irony in her performances: you get the impression that everything she sings is sincere, straight from the heart. She has been compared with both Melody Gardot and Nancy Wilson—to which one might also add Julie London. The combination of that voice and her classy original material makes for a sophisticated package reminiscent of bygone times, when jazz was still mainstream and glamor was the order of the day.

Jazz is in the blood. Her grandfather Gerry Smith was a well-known jazz pianist in Scotland in the 1960s and 1970s, and her father's older sister Ann was a talented jazz singer. She and Georgia would play together. "Growing up as a wee girl, I would hear this music in the house and at family parties. I was always intrigued by it—mesmerised by it. If you didn't play an instrument or sing, you weren't allowed in the party. If you brought a boyfriend home who wasn't musical, then.... good luck to him!" She laughs. "Every weekend there would be something, and you had to do your party piece."

Studying music at Napier University in Edinburgh, she learned the Estill voice training method. "It's not enough to have this one wall of sound as a vocalist," she explains, "It's important to create different colours and textures which portray or serve a particular emotive intention." Estill enables the singer to make physiological changes to the body's vocal mechanism. "An example would be retraction, where you open the false vocal folds to create a yawn shape. And what it does is create lots of deeper, darker overtones in the voice, you get a retro sound, more of a sob quality."

Integrating Estill techniques into her existing singing style was difficult at first. "But the more I've been singing in front of an audience, then I'm realising, Oh, that's where I can use twang, or cry, or sob, or falsetto, or belt. It isn't until you're in the depths of a gig that you realise the context whereby you can use the quality., these onsets/offsets, and you're thinking, I'll never use that, but when you get on the gig you see the point of it."

But what has really made Cécile stand out from the pack is her songwriting collaboration with pianist Euan Stevenson. They met in Glasgow in 2008 through a mutual friend. He was looking for a singer, and she was looking for a band. "We just started jamming together and getting into sessions together, and we realised very quickly that we had very similar influences, a lot of the same love for Duke Ellington, Aretha Franklin, Stevie Wonder... all these great artists." Uninterested in ephemeral trends, they set themselves the goal of writing the timeless standards of tomorrow. At first the songs were in the pop vein, but as time went on they veered more towards jazz. Speaking backstage at the band's Ronnie Scott's date, Stevenson adds, "We still try and write a song that we think's going to connect with people. You can't just write what you perceive to be jazz material, you just try to write good songs. So for example 'Harpoon' is very Ellingtonian, and 'Ever Burning Flame' is much more Stevie Wonder."

"So many men have told me I've made their wives cry," says Cécile, hurriedly explaining that a lot of people have been moved by the songs. "It's got to be universal," adds Stevenson. And Cécile continues, "I think that's why there's two of us. A writing partnership only exists when you can put ego aside and concentrate on the greater good of the message and the connection of the song and the lyric. That's what we always aim for." It is this cool, professional focus that has made the partnership so strong and enduring. The album includes two waltzes ("The Month of May" and "Goodbye Love"), a tango ("Harpoon"), and another song in 5/4 ("Bittersweet"). But one barely notices: in every song the rhythmic style and time signature is seamlessly integrated into the harmonic structure and the melody. As Stevenson puts it, "Good art conceals art."

Cécile mentions God twice on the album. Is she religious? "I'm a very spiritual person, yeah. I'm from a Catholic family. I like to meditate, and I like to think there's a higher power, a higher being. And I feel like the songs are the gift I have. I can't take credit for it because the source is from the higher power and it's my duty to share it with the world." This belief is not new: it is shared with performers of all kinds, including Jon Hendricks, who was convinced that the words flowing so rapidly from his pencil were the product of a higher mind than his own. It certainly explains the depth of Cécile and Stevenson's music, and the seriousness involved in its creation. It is no coincidence that her favorite singers are gospel singers, especially Mahalia Jackson.

Leslie Bricusse, the writer most often associated with Anthony Newley, died recently, leaving behind such timeless compositions as "What Kind of Fool Am I?," "Who Can I Turn To?," and "Feeling Good," as well as the James Bond themes "Goldfinger" and "You Only Live Twice." The quality, power, and emotional punch of the Cecile-Stevenson songbook bears comparison. "I want to write a Bond song," declares Cécile, "Our next goal is to write the next Bond song. Like, a hundred per cent serious. And to be a Bond girl, but that's not going to happen!" Well, stranger things have been known. Over to you, Barbara Broccoli and Michael Wilson...