By DAN BILAWSKY
May 9, 2014
Sign in to view read count
Long gone are the days when the flute was only seen as a jazz novelty or a saxophonist's double. Once upon a time you could count the number of notable jazz flautists on a hand (or two), but the ranks have swelled a little bit over the years, and those leading the charge today aren't content with working the same exact angles as their predecessors.

An ambitious crop of flute players are out there shaking things up nowadays. Ali Ryerson's Game Changer (Capri, 2013) lived up to its name, proving that flutes could fill out a big band and sound damn good in the process; Mark Weinstein continues to find new ways of exploring and twisting the Latin jazz diaspora; and Nicole Mitchell continually balances the cerebral with the open-ended in her astounding work. Those artists, along with a few others, have truly helped to further the role of the flute in jazz. Here's a few words on two others that are taking this instrument into different areas: 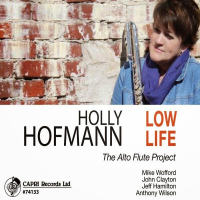 Holly Hofmann has been a fairly high profile jazz flautist for years, working with everybody from bassist Ray Brown to pianist Bill Cunliffe to trombonist Slide Hampton. Her work in Flutology, a flute trio-plus-rhythm group that put her in a front line with Ryerson and the great Frank Wess, raised her profile quite a bit, and a string of positively-received releases on the Capri and Azica imprints have helped her establish a reputation as one of the finest jazz flute players operating today.

Low Life is Hofmann's twelfth album, and it finds her working exclusively with alto flute. It's an instrument that, as Hofmann notes, has a limited range, but in her hands, its expressive qualities are limitless. The idea for this record was to take the negative connotation away from the concept of an "easy listening" record. Hofmann just wanted to present "simply arranged songs that show the beauty of the music and the alto flute," and that she does.

Here, Hofmann works with longtime piano mate Mike Wofford and a trio of West Coast heavies—guitarist Anthony Wilson, bassist John Clayton, and drummer Jeff Hamilton. The results are predictably positive. Hofmann connects with Wilson on the guitarist's "Jack Of Hearts," melds with Wofford on Clayton's haunting "Touch The Fog," and keeps crossing lines, moving from the serious to the serene to the soulful, on her own "Lumiere De La Vie." A hip bass-and-drum-rims groove makes Mulgrew Miller's "Soul-Leo" an easy sell, a flute-and-piano duet on "The Very Thought Of You" puts the spotlight on the established Hofmann-Wofford team, and tranquility triumphs during Pat Metheny's "Farmer's Trust." If only all easy listening records were this easy to listen to. 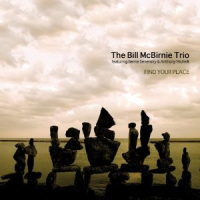 Canadian flautist Bill McBirnie isn't quite as well-known as Hofmann in American jazz circles, but he's no slouch. He's worked with pianist Junior Mance, vocalist Emilie-Claire Barlow, and Cuban super group Irakere. He's also won numerous awards and received high praise from none other than the flute kingpin—Sir James Galway. Galway even tapped McBirnie to serve as the "resident Jazz Flute Specialist" at his website.

For his sixth album, McBirnie decided to try something different, fronting an organ trio with his flute. Fellow Canadians—drummer Anthony Michelli and pianist Bernie Senensky, whose run in with an organ at a previous McBirnie session planted the seed for this album—round out the group. The material is fun and familiar. A Latin-ized "So In Love" starts things off, but it's off to church on "Yes Indeed!." As the program continues, McBirnie and company give a nod to Horace Silver ("Sister Sadie"), turn a Beatles classic into something a bit more Ray Charles-esque ("Oh! Darling"), and visit Brazil ("Estate"). McBirnie balances a love of melody with the joy of frolicking, as he dashes about with chops-a- plenty during his solo stands. Other highlights here include a charged run through Wayne Shorter's "Yes Or No" and a pleasing take on Thelonious Monk's "Rhythm-A-Ning."

It's hard to understand why flute and organ aren't paired together more often. Perhaps it has to do with the stereotypes that separate them, with the greasy-and-soulful organ living miles away from the refined flute in the mind of some people; or maybe most flautists just don't think to go there. Thankfully, Bill McBirnie isn't like most flautists.