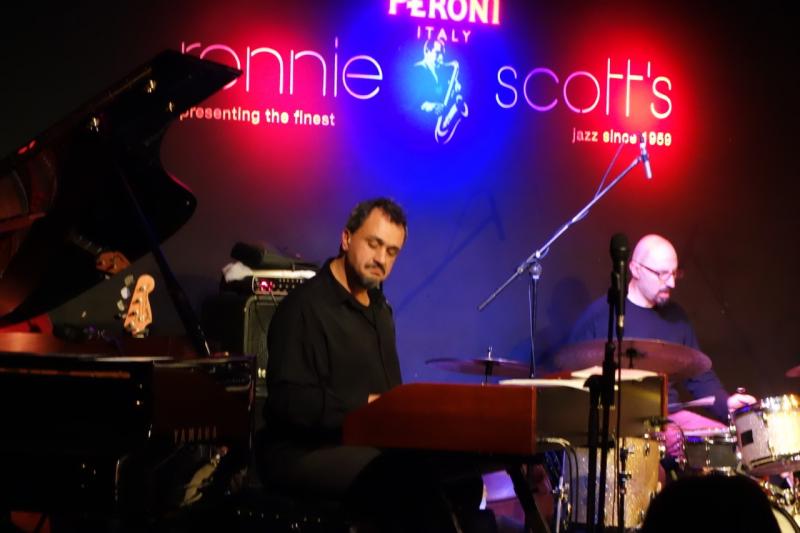 The London Jazz Festival may have ended for another year the day before, after 10 exhilarating days, but jazz never rests at 47 Frith Street Soho, home to Ronnie Scott's Jazz Club. Monday night was business as usual, as it has been pretty much every night—bar a three-month closure for refurbishment in 2006— since 1959. Following singer Mario Biondi's sold-our early show, it fell to Norwegian guitarist Frode Kjekstad's Italian Job Trio to see the small but enthusiastic crowd through to closing time in the wee hours of the morning.

The first set began with "Saluda Hakim," from Garnett's debut as leader, Serpent (Whirlwind Recordings, 2011). The tune paid overt tribute to alto legend Charlie Parker who, like many African-Americans of his epoch, converted to or studied Islam— perhaps seeking a measure of solace from the pervasive climate of racism. The players introduced themselves one by one in a series of expansive solos. Whilst also bebop- influenced, Kjekstad's "Brooklyn Bound" was more melodically contoured and more spacious than the frenetic opener. Extended guitar, tenor sax and drum solos were all delivered at a leisurely pace. Marisco was content to play the absent bassist's role, and in general, even when soloing, his voice was notably spare, with the number of notes taking a back seat to the hefty emotional weight he conveyed in each short phrase, every chord or carefully placed single note.

A memorable interpretation of Italian composer Ennio Morricone's "Giu La Testa" followed. Zirilli's progression from brushes to brush and mallet, then mallet and stick and finally two sticks reflected the increasingly bold contours as the composition grew apace. Frode's laidback blues referenced the elegance of guitarist Wes Montgomery as he explored Morricone's melody, though all the voices converged in a strong finale. The other track from The Italian Job was organist Jack McDuff's "Jack-Pot," a swinging blues whose rising/falling waves of intensity paid tribute to one of the key figures in the Hammond B-3's heyday. With Garnett and Marisco in harness, this hard bop and soul-flavored blues also brought to mind organist Big John Patton and his numerous tenor collaborations. 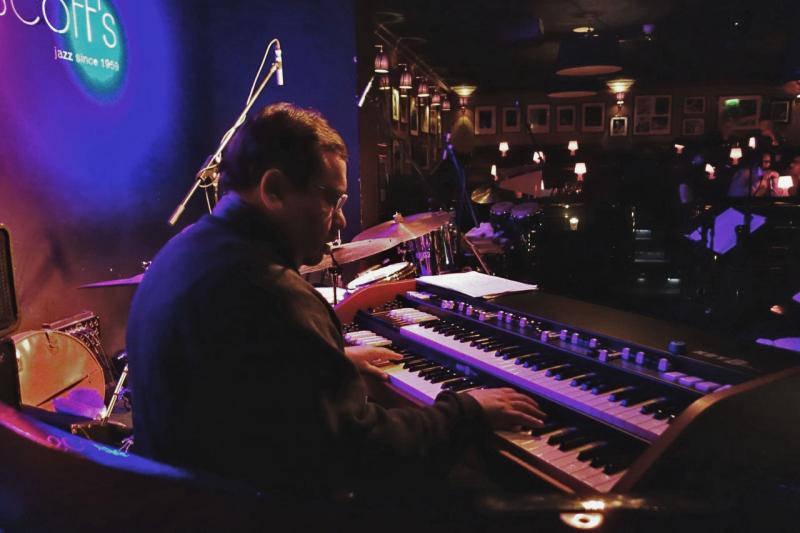 Marisco introduced the next number thus: "The KeyB is modeled after the Hammond B3, but this song is dedicated to the 3 Bs—Bush, Blair and Berlusconi; I wrote it in 2002 at the time of Iraq. It's called 'Catastrophe.'" Appropriately, the music wasted no time in going straight for the jugular with its breathless tempo carrying urgent bop solos from all. Frode's vocabulary displayed a country-like twang, while Zirilli's brushes injected a skipping flow to the intense quartet performance.

After a short intermission the second set picked up where the group had left off. London-based, Russian alto saxophonist Zhenya Strigalev brought his Parker-ish lines to the mix on "Just in Time," with Frode's fast, melodic solo more Django Reinhardt than Montgomery. On "Medium Blues," London tenor player Alex Harris brought a more measured pace to the stage reminiscent of the somewhat unsung tenor saxophonist Warne Marsh. Marisco impressed with a solo of subtle textural shades and striking contrasts in tempo, and it was his final contribution before departing for the night bus to Aberdeen, in Scotland.

The organ chair was filled with aplomb by Singaporean veteran Jeremy Monteiro. Better known as a pianist during his 25-year collaboration with tenor saxophonist Ernie Watts, Monteiro is no slouch on the organ either, as his trio Organamix's Groovin' at Groove Junction (Jazznote Records, 2009) and the Asian Jazz All-Stars Power Quartet's Live at the Living Room Jazz Festival, Bangkok (Jazznote Records, 2011] amply demonstrate. "Falling in Love" featured an exhilarating solo from Monteiro, who explored the extremities of the twin-deck KeyB with obvious joy. Switching to piano, Monteiro led the band through "Softly, as in a Morning Sunrise," with London-bred Polish guitarist Artie Zaitz impressing as soloist. Bassist Dario DiLecce, newly arrived in London just two weeks before provided solid support.

More musical chairs followed as Kjekstad, Garnett and Strigalev reunited on a charged interpretation of tenor player Sonny Rollins's "Doxy," with some rousing individual and collective playing. The jam session ended at 2.30 am, signaling the end of another vibrant night of jazz—around the 19 thousandth—at Ronnie Scott's. As entertaining as the jamming undoubtedly was, the subtler, though no less vibrant dynamics of Frode Kjekstad's Italian Job Trio with Garnett is what will linger most in the mind.