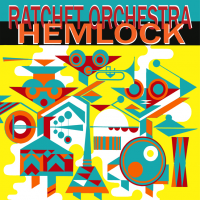 Wikipedia defines a ratchet as a mechanical device that allows for motion in only one direction; it also could be a piss-take or deliberate mispronunciation of "rat shit." Certainly the former is more appropriate for The Ratchet Orchestra's Hemlock, from a very large ensemble led by bassist/composer Nicolas Caloia. This group of 30 players is primarily drawn from the huge pool of improvisers based in Montreal, Canada, and the sound, thankfully, isn't just everybody playing all at once— though there are some moments of that, too. The group started off as a quintet, but the follow-up was this large ensemble performing a 2007 tribute to keyboardist Sun Ra with the great Live at The Sala Rossa (Actuelle, 2007). Hemlock is a strong recording with good tunes; what helps is that the audio is top-notch—all the instruments are clear and there's no sonic mud to cloud the waters.

Two YouTube videos show the recording process of "Kick" and the title tune, and the vibe that comes from everybody being in the same room at the same time is apparent. It's a dilemma, no doubt, to determine how to evenly share the load and give everybody a chance to shine. While there are no consistently featured players, the division of labor is balanced and intricate, showing that Caloia has a firm grasp on getting the best out of his players.

What was expected from a bassist-led large ensemble was typical big band, and while there's much of that, what is particularly enticing are the occasional sounds from fusion- era big bands such as bassist Jaco Pastorius' Word of Mouth—high- pitched woodwind ornamentation, strings, electric piano-type sounds—on "Willow" and "Wish pt.2." "Dusty" provides the best example of "motion in one direction," driven by a plinking rhythm with a quirky and fuzzed guitar solo adding the cherry on a great song. "Safety" provides a nice contrast by starting off with a slow tempo that picks up, but unfortunately gets a little ponderous in the middle. "Hemlock, pt.1" and "Hemlock, pt.2" creatre a great closer—"pt.1" opening with staccato notes pitting against levels of shifting tones, while in "pt. 2," things get noisy and tumultuous.

About The Ratchet Orchestra