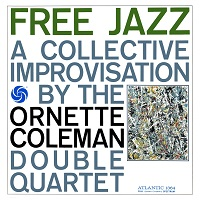 Alto saxophonist Ornette Coleman's masterpiece, Free Jazz: A Collective Improvisation by the Ornette Coleman Double Quartet, is one of the hinges of jazz evolution. As a musical hinge, Free Jazz, heard from this side of its development, is a bit of an anticlimax compared with the two-label, five album prelude to this point: Something Else!!!! (Contemporary, 1958), Tomorrow is the Question! (Contemporary, 1959), The Shape of Jazz to Come (Atlantic, 1959), Change of the Century (Atlantic, 1959) and This is Our Music (Atlantic, 1959). Had Coleman done nothing else but release these first five recordings, his legacy as one of the pioneers of free jazz would still be assured. But on Free Jazz Coleman took that final step into the chaos of untethered group improvisation and in doing so took the "free" in free jazz as far as it would go. Tenor saxophonist John Coltrane, taking his own route, would do the same five years later with Ascension (Impulse!, 1966).

If following the cause-and-effect explanation for the development of free jazz, Coleman's music was an evolved response to the highly structured be bop of the late 1940s and early 1950s and swing-era big band jazz before that. Unlike Coltrane, free jazz's other high priest, Coleman did not have a slew of recordings before he began disassembling the genre. Coleman emerged anxious and impatient with the music when he started to record in 1958. Coleman's creative evolution in free jazz lasted a mere three years and was dense and rapid.

Coleman took a hard right emerging from This is Our Music, increasing the size of his standard ensemble to his "double quartet." In this, Coleman solved his problem of employing sympathetic drummers Billy Higgins and Ed Blackwell and bassist Charlie Haden and Scott LaFaro by simply using them all. Coleman retains trumpeter Don Cherry, adding trumpeter Freddie Hubbard as Cherry's cohort and taking on no less than multi-reedist Eric Dolphy as his own. The modus operandi of Free Jazz is even simplier than what trumpeter Miles Davis famously employed three years earlier, when he and his famous sextet recorded Kind of Blue (Columbia, 1959): Coleman sketched out a brief and dissonant fanfare to introduce and separate solo sections of his mass improvisation and then they entered the studio and blew. This might stand as a last vestige of the traditional jazz "head-solo-head" configuration. You have to start and end somewhere.

No matter how you cut it, Free Jazz cannot be heard in a post-modern vacuum. Without context, this "music" is effectively un-listenable. Apologists for free jazz dismiss this characteristic as part of the music's experimental nature. Needless to say, this "experimental nature" renders this music less appropriate for consideration over a glass of neat single malt and more at home with Fantasia on the television with the sound muted, under the influence of ergot's muse. That is not to imply that Free Jazz has no artistic merit, only that a bit of background more fully enhances the experience.

Starting with the premise that Free Jazz, after the briefest of direction, devolves into an eight-part improvisation with all parts equally independent, observations may be noted. While nature, when left to her own devices, typically migrates from a state of order to greater disorder, the musical synthesis on Free Jazz tends to go into the opposite direction: from a greater disorder to order. "Free Jazz" begins as a schizophrenic note salad, borne in chaos and given only a whiff of direction. The music may best be described as the best New Orleans Dixieland exposed and mutated by radiation exposure. It is the phenomenon where the music, at first blush, sounds completely untethered, at least until ideas begin to coalesce.

Once the piece is started in earnest, certain characteristics begin to manifest. Among these is Coleman's experiences playing blues. It saturates his playing and is present throughout the piece. Cherry's and by proxy, Hubbard's hard bop bona fides reveal themselves potently. From an ensemble point of view there is a migration through evolution, where the elements of swing can be heard in call-and-response phrasing and some natural Count Basie big band riffing emerges naturally among the horns. Also revealed is the innate sense of humor of the musicians, heard in the quotes of nursery rhymes and other jazz pieces. Again, this music is meaningless in a vacuum.

The musical environment improves as the 37-minute plus piece evolves. The end section contains provocative bass and drum interplay, occurring after the horns make their combined and separate statements. On that note, let there be no doubt that Eric Dolphy possessed the freedom vision, seemingly from the very beginning, and Freddie Hubbard's post bop experience prepared him well also. From a full-ensemble direction, it is instructive to listen to the 17-minute plus "First Take" to hear the dry run of what would become Free Jazz. It is readily evident that the longer version benefited from a run through showing that some ideas solidified between the two versions.

Free Jazz may exist as a piece of music to possess for historic reasons rather than aesthetic musical ones. If a lesson exists in this music it is that context is always important and a little knowledge about that music is not a dangerous thing, but a catalyst to further investigation and listening. In that, lies the values of Free Jazz.