Ron Stabinsky: Free for One 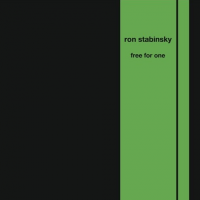 Pianist Ron Stabinsky, officially became the fourth member of the Mostly Other People Do the Killing with Mauch Chunk (Hot Cup Records, 2015) after having performed with the group live in 2013 and on Blue their recreation of Miles Davis' Kind Of Blue (Columbia, 1959) expertly restoring the Wynton Kelly/Bill Evans parts. The pianist has been part of the Peter Evans Quintet since the 2013 recording Destination Void (Self-produced, 2014). Stabinsky has also worked with Dave Liebman and Tony Marino on the terrific baritone saxophonist Charles Evans' self-produced On Beauty (2015) and Subliminal Leaps (2013) as well as classical music releases with Rhonda Taylor and Sophie Till and a trio outing covering the work of American composer Alec Wilder Wilderness (Mark Records, 2016). Free for One, on Moppa Elliott's Hot Cup Records, is Stabinsky's debut as a solo artist.

Free for One is comprised of eight piano improvisations which Stabinsky recorded in a one-day session in 2015, and where he let his intuition guide the proceedings. Under the one-time mentorship of Bill Dixon, the pianist's journey to this release has been a patient process of developing methodological and creative skills over a decade. The first two tracks, "After it's Over" and "31" are predominantly abstract with occasional fragments of a melody helping to maintain the flow. There are classical influences present among the intangible sway of rapid notes on "Viral Inflection." "Not Long Now/Long Now," at almost thirteen minutes in length, is the most consistently harmonious track. A jagged opening meets with gracefully ringing chords over a moderately walking pulse. "Once, But Again" gently closes the album with controlled improvisation, shimmering, building up and then floating off.

With its shrewd use of melody, improvisation and texture, Free for One presents a credible alternative to much of the archetypal solo jazz piano catalog. For all of Stabinsky's technical expertise, there is never a sense of these pieces being exercise-like as the pianist avidly projects emotion even in the album's most abstract pieces. The stylistic variety of the improvisations holds together consistently and Stabinsky's debut proves to be impressive and memorable.

...After It's Over; 31; Viral Infection; Gone Song; For Reel; Not Long Now/Long Now; Rapture; Once, But Again.