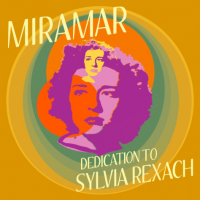 The modern Latin-American bolero (romantic ballad) of Spanish heritage, originated from the Cuban trova. Mexico influenced the genre with numerous prolific trios recording boleros, gaining an international audience. Its popularity spread with the development of cinema and phonograph records, reaching a zenith between the 1930's and 1960's. Puerto Rico was not immune to this musical phenomenon, and during the 1950's, Sylvia Rexach became the island's prominent interpreter of boleros. Though dying in 1961 at age 39, she has garnered an enduring and revered cult status among aficionados of the genre.

With Dedication To Sylvia Rexach, the musicians in Miramar not only honor the music and memory of Rexach, but they bring the bolero into the 21st century, with all its romance and nostalgia intact. Seven of the ten songs are Rexach compositions, and are given the royal treatment. The principal members, vocalists Rei Alvarez, and Laura Ann Singh, combine with pianist Marylysse Simmons-Argandoña, for the original three tracks on the project; extending the bolero concept into a broader Latin-American scope.

The presentation here is based on the duo format, with Alvarez and Singh combining and alternating lead vocals. They make for an interesting pair as Alvarez comes from a salsa background, and Singh spent years in Brazil singing bossa nova. Their harmonizing is exquisite and they complement each other in unison. The intricate musical nuances of bolero compositions are difficult to perform accurately, and Simmons-Argandoña, as principal keyboardist and musical director, executes the pieces to perfection. The addition of strings on two arrangements introduces a touch of sophistication to the ambiance, in the appropriate dosage. There is a traditional approach that must be respected, and Miramar, as an ensemble, stick to the established format, though they add novel contemporary references to the mix.

Sylvia Rexach smoked, drank, stayed out late, and was the personification of the bohemian cabaret singer in her time. She lived the life she sang and wrote songs about, and in 1949 was the leader of San Juan's first all-female band, enjoying major club dates and extensive airplay on the radio. But her most popular 1950's recordings were performed with solo guitar accompaniment by Tuti Umpierre, and are the songs that would fortify her legacy. This Miramar dedication culls from this period, and comes at a time when Latin musicians are reaching into their collective heritages for inspiration. Sylvia Rexach was the perfect choice, for she was the definitive feminine bolero singer, who deserves this appreciation and recognition.