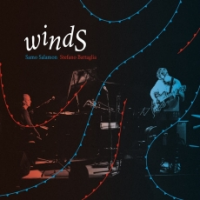 Slovenian guitarist Samo Salamon and Italian pianist Stefano Battaglia are not an obvious pairing for a duet recording. Salamon's discography features his own compositions, frequently with an electric, fusion edge; classical/jazz pianist Battaglia's most well known recordings for ECM are in an impressionistic style. There are two Salamon compositions here, but the bulk of the program is made up of impromptu performances by the duo, emphasizing the more abstract playing that is sometimes part of their styles. "Rain Forest" opens the set with delicate atmospheric sounds from guitar and the inside of the piano. Then Battaglia really gets into the sound effect act with striking bell-like sounds produced by prepared piano, sounding just like a glockenspiel. He uses standard and prepared piano sounds for his unaccompanied solo, then the duo travel into freer territory together, gently fading out to end.

Battaglia's prepared piano provides the muted hammering ostinato sound that runs through "Hammer," the other extended improvisation. After a lengthy piano introduction Salamon enters with some of his most conventional soloing on the album, which eventually leads again to more abstract territory. "Girl With a Nicotine Kiss" was first recorded on Salamon's Kei's Secret (Splasch Records, 2006)—a lovely ballad which gives the pair an opportunity to play a composition with a clear structure, which they do beautifully. The applause at the end is the first real indication that this is a live recording. "Betty O" is the last improvisation, this time opened by Salamon playing solo. An additional Salamon ballad, "Sleepy Burja," closes the album. It's another beautiful piece, with a lullaby feeling, featuring effective volume swells from the guitar and empathetic piano accompaniment. Warm applause follows, and the players acknowledge each other from the stage.

There's no doubt that Salamon and Battaglia could have made a whole album of either compositions or improvisations, but there's a nice contrast set up by the mix here. The whole program has the excitement of musicians working without a net, to thrilling effect. Salamon's twentieth album as a leader begs for a sequel: maybe with a rhythm section next time?