By David Rickert
January 31, 2011
Sign in to view read count 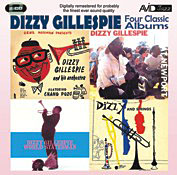 Trumpeter Dizzy Gillespie was one of the few jazz musicians equally adept (and influential) in small groups and fronting big bands. After the bebop heyday, he spent the fifties equally divided between smaller groups and a larger orchestra. His days as a bebop pioneer and a developer of Afro-Cuban music behind him, he now had a new role: ambassador. The sessions covered by this compilation come from around the time that Gillespie led a crack big band for a State Department sponsored tour overseas. Two of them, 1957's Dizzy Gillespie at Newport and 1954's Dizzy Gillespie and his Orchestra, are live dates, while 1955's Dizzy Gillespie and Strings and 1956's World Statesman, are studio dates. Many of these recordings have been difficult to locate until now.

There was a time when the Newport Jazz Festival booked jazz musicians and Gillespie would have been a big star there. This 1957 concert finds Gillespie's band in superb form with burly, extroverted arrangements and solos. The bandstand was stacked with talent like Benny Golson, Wynton Kelly, Billy Mitchell, and Charlie Persip, and terrific charts from Golson, Quincy Jones and Gillespie, among others. Despite the somewhat thin sound that seems to plague all Newport recordings, the band seems invigorated by playing for the bourgeoisie, and workhorses like "Doodlin,'" "I Remember Clifford," and "Manteca" get fine treatments. Sadly, a few performances from the LP were left off of this release.

The deceptively titled Dizzy and Strings only features Gillespie with strings for half of the selections, as if Norman Granz thought that perhaps a whole album of strings with Diz was a little too much. The string selections, while nice, do have a feel of a horse champing at the bit to get going; better to hear Gillespie climb into the stratosphere than play it this cool. The second half features the orchestra, with great solos from Gillespie, Lucky Thompson and J.J. Johnson, with arrangements by Buster Harding, a veteran who provided charts for Count Basie, Roy Eldridge and Gene Krupa, and they have that feel of the killer-diller about them.

World Statesman duplicates Gillespie's program on the State Department tour, a selection of standards ("I Can't Get Started," "Stella By Starlight") and pseudo standards ("The Champ," "Doodlin'"). Of course, "Night of Tunisia" is here for its only appearance on these recordings, and what comes clear is that Gillespie had perfected the ability to translate bebop ideas into the cumbersome format of the big band. The riffing is complex, the soloing dexterous; everything was in place to meld the two styles together.

The 1954 session is an odd way to finish the collection, being the earliest, but it's also the most entertaining (and the only one with Chano Pozo). The bop vocal "Ool-Ya-Koo" features Diz and Ernie Henry scatting nonsense to great effect, and various members of the orchestra get their own spotlight on successive numbers, culminating in a terrific "Manteca" that's a little fierier than the Newport one.

These recordings are difficult to find and in the case of the first and last release it's a shame that the entire performance wasn't included. Still, it's nice to have these somewhat obscure releases back in some form.