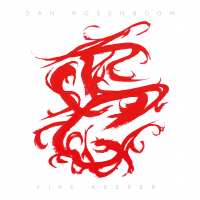 "Fusion" has rarely been so bold. Drawing on the traditions of the original Mahavisnu Orchestra, and Ornette Coleman's Prime Time, with liberal doses of Slavic folk-music and free-jazz, trumpeter Dan Rosenboom's Quintet is an experiment of nuclear proportions.

This swirling mélange opens "Leaving Moscow," grounded by Scnelle's brutal cadence and the relentless jabs of Kurosawa, setting up an explosive melodic unison with offset commentary from Templeton's squiggly alto and the hot distorted legato of Noice.

On the nervous jangle of "Seven on Seventh," Templeton's serpentine lines punctuate with harsh screams and morph into a total squall fueled by Noice's ring-modulated caterwaul. The leader peppers "With Fire Eyes," with growling, burbling plunger mute commentary, followed by a Gothic theme that draws Albert Ayler squeals from Templeton.

Impossibly tight unisons create a constant shock of tension, such as the Deep Purple meets Mahavishnu mashup of "Tadodaho," where Rosenboom's delayed trumpet preens and glistens—on other tracks, the flirtation with metal drives the sonic landscape—such as Noice's granular distortion on "Hush Money."

It all comes together on the episodic "The Fifteenth Hour," another disjointed, Ornette-ian challenge that Kurosawa splits apart with a solo that toggles between the sounds of 70s synthesizers and Jamaaladeen Tacuma underwater. Not to be undone, Rosenboom gushes forth with fearsome alacrity, evoking the muscle of Freddie Hubbard and tone sculpture of Wadada Leo Smith, (with whom Rosenboom studied at Cal Arts.)

Complex and exciting, Fire Keeper burns, lurches, and leaps with intelligent virtuosity and a breathtaking sense of ensemble cohesion. This might be where jazz is heading—so strap in and enjoy the ride.