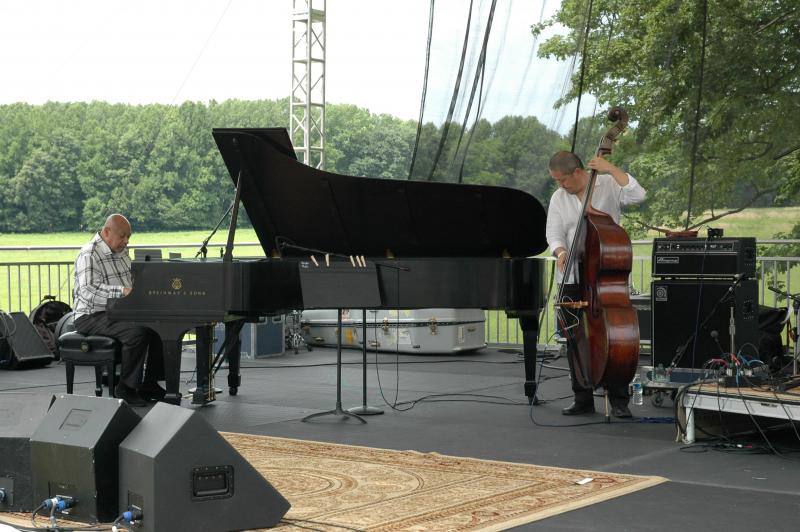 BY VICTOR L. SCHERMER
June 11, 2011
Sign in to view read count
Fifth Annual Longwood Gardens Wine and Jazz Festival
Kennett Square, PA
June 4, 2011
Longwood Gardens is a horticultural conservancy spread over the countryside in Kennett Square, Chester County, PA. It is one of those beautiful meccas with the potential to serve memorably for a summer music festival, as anyone who has attended Juan Les Pins, Tanglewood, or Ravennia can attest.

Tom Warner, who has done excellent jazz and classical music programming for major concert halls, including Philadelphia's Kimmel Center for the Performing Arts, has brought his knowledge, skills, and ambition to the task of making Longwood the home for major events. In particular, as part of a series entitled "Notes from the Forest," the Fifth Annual Wine and Jazz Festival featured four groups that reflected Warner's taste for great music. The Tony Miceli Quartet, the Kenny Barron, the New York Voices, and the Ravi Coltrane all provided a stellar and varied afternoon of jazz to suit all tastes, just as the tasting tents for the local Pennsylvania vineyards, lining the back edge of the concert meadow, did for wine lovers. 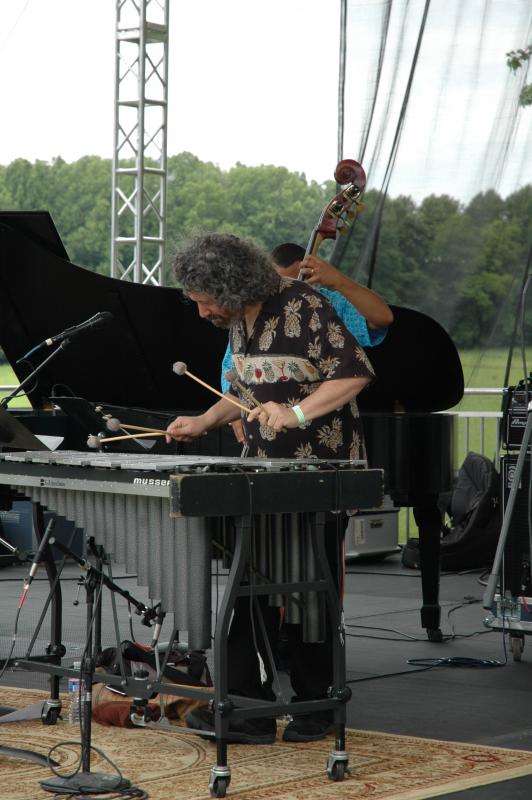 The concert began with vibraphonist Tony Miceli and his frequent associates—pianist Tom Lawton, bassist Matthew Parrish and drummer Butch Reed—in a mellow set appropriate for a relaxed beginning. A highlight of the set was Milt Jackson's "Blues in C Minor," featuring the deep and rich interpretations that have earned Miceli the increasing respect of listeners and musicians alike. An extraordinary musician and teacher in Philadelphia for three decades, Miceli is beginning to gain a well-deserved place on the international jazz scene. His seasoned group provided capable backup, but it was Miceli who shone in the set.

Following a relaxing break, The Kenny Barron Trio, with bassist Kiyoshi Kitagawa and drummer Johnathan Blake, delivered a rock-solid performances, allowing them to display their remarkable collective skills. Barron, a jazz icon who has worked with many of the greats in the U.S. and abroad, has, in the process, acquired his own unique and easily recognizable sense of swing, drive, and sound with unwavering refinement and discipline.

Standards like "I Hear a Rhapsody" and "Blue Moon," as well as a hard-driving Barron original, "New York Attitude" gave the pianist ample opportunity for the kind of improvisational skill that has earned him a place among the National Endowment for the Arts Jazz Masters. In addition, his stunning workup of Thelonious Monk's "Shuffle Boil" allowed him to display a grasp of rhythmic and harmonic complexities well beyond the expected—even for him. Kitagawa pushed technique to the edge with incredible lines of thirds that would have had Monk in a spin, while Blake kept a firm and relentless rhythm throughout—doing double service with Ravi Coltrane's Quartet later in the afternoon.

Spice and contrast were provided by the New York Voices, a quartet of vocalists that has exemplified the vocalese tradition of Lambert, Hendricks & Ross for over two decades. Singers Kim Nazarian, Peter Eldridge, Daemon Meader (who doubles on tenor sax), and Lauren Kinahan delivererd a grooving set of lively standards, beginning with a nod to the good weather, "On a Clear Day (You Can See Forever)," and covering a lot of musical ground from the hippie era's "Surrey on Down to a Stone Cold Picnic" to Louis Prima's "Sing, Sing, Sing," with some jazz standards like "Love Me or Leave Me" and "No Moon at All" thrown in for good measure. 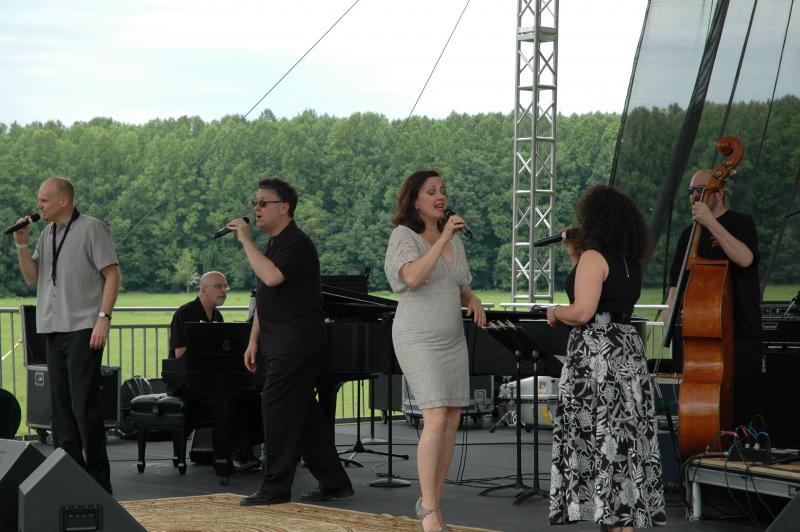 The group outdid itself on John Coltrane's "Moment's Notice," which included transcribed Trane solos done in unison vocalese. The singers and their backup musicians kept up amiably with some very difficult changes. Whoever does the arrangements for this ensemble deserves a lion's share of credit for their success, the overall impact making the difficult or impossible seem like a cakewalk.

Finally, In the late afternoon, The Ravi Coltrane Quartet came on, this incarnation featuring trumpeter Ralph Alessi, bassist Lonnie Plaxico, and drummer Johnathan Blake. Both Ravi Coltrane and Alessi are known for their rich exploitation of free jazz and post-modern jazz developments, and on this occasion provided the only true cutting edge musical experience.

They started with one of Coltrane's trademark exploratory tenor saxophone cadenzas, segueing into an untitled low mood composition by Alessi, which the saxophonist's wife humorously dubbed "Dr. Scholl," perhaps acknowledging the music's soft, cushiony feel. The group went on to explore other elements of Ornette Coleman's free jazz, finishing up the day in the experimental stratosphere. While their music was highly satisfying for the more advanced listeners in the audience, the group might have been better placed earlier in the day, when others would have the energy to stretch their listening capabilities.

The setting for this concert was exceptional. The wine tastings and food were well above average, and the Longwood and winery staffs cordial and helpful. One piece of useful criticism that might be offered concerns the sound system. The beginning of Kenny Barron's set was disrupted by stray sounds and echoes, an insult to a jazz master, which Barron dealt with graciously. In addition, the sound level diminished with the inverse square of the distance from the stage, a law of physics that is usually addressed with a considerably more powerful loudspeaker system. Within a hunded feet of the stage, the music could be heard quite clearly, but at the farther reaches of the meadow, where many of the listeners were congregated, the feeling was like being in a very noisy nightclub.

As a lesson in learning from experience, the first concert at Tanglewood was performed in the rain, which inspired the donors to build the famous Koussevitzky Music Shed, with its excellent acoustical projection of the music onto the lawn beyond. Perhaps so inspired, some philanthropists will find the means to donate a suitable sound stage on this meadow, making it an exquisite setting for a summer music festival, one that is much needed in the Philadelphia area.