The premier jazz vocal act of all time, Lambert, Hendricks & Ross revolutionized vocal music during the late '50s and early '60s by turning away from the increasingly crossover slant of the pop world to embrace the sheer musicianship inherent in vocal jazz. Applying the concepts of bop harmonies to swinging vocal music, the trio transformed dozens of instrumental jazz classics into their own songs, taking scat solos and trading off licks and riffs in precisely the same fashion of their favorite improvising musicians. Vocal arranger Dave Lambert wrote dense clusters of vocal lines for each voice that, while only distantly related, came together splendidly

Vocalist and jazz violinist Teresa Broadwell is formally trained, holding a BM from the Crane School of Music, and an MA in Jazz Studies from the College of St. Rose. Her vocal influences include: Lambert, Hendricks and Ross; Eddie Jefferson; King Pleasure; Sarah Vaughan; Betty Carter; Ella Fitzgerald; and Anita O'Day. On fiddle, she draws from Stuff Smith, Joe Venuti, Matt Glaser, and Stephan Grappelli. Other past recordings include: "Sunny Side of the Street," with the "New Moon Swing Band," (a group that performed on Garrison Keillor's "A Prairie Home Companion" radio show) and "Everything's Jake," featuring her swing band “Thrivin' on A Riff." Broadwell moved to the Capital Region in the early ’80’s , where she formed her own groups, performing at concerts, festivals, radio and television shows, and jazz clubs in the greater Northeast

Birthday shout-outs to George Gershwin (with a nod to Ann Ronnell and Kay Swift, women writers that he encouraged) and saxophonist/arranger Frank Foster, along with new releases to round out the month of September. Playlist Lou Caputo “Busy Busy Busy" from Uh Oh! (Self-released) 00:00 Danny Bacher “Joy Spring" from Still Happy! (Whaling ... 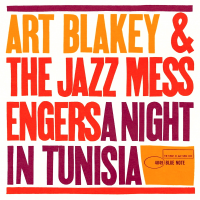 Dizzy Gillespie's “A Night in Tunisia" has been done almost to death. Wikipedia says it has been recorded at least 500 times and it is the title track to at least 30 albums. It might be the most recorded bop tune of all time. Who did it best? Take your pick. Dizzy ...

In 1962, Annie Ross had to take a health break from the wildly successful vocal trio Lambert, Hendricks & Ross. In her place, Yolande Bavan (above) was hired. When I interviewed Yolande in 2007 three months after starting this blog, she told me the story of how she came to join the group (you can read ...