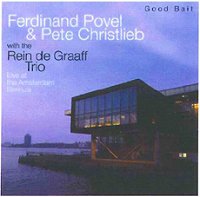 Live at the Amsterdam Bimhuis

Put two of the world's outstanding tenor saxophonists together on the same stage, add a marvelously supple and supportive rhythm section, and what you have is a night to remember and appreciate for years to come—and for those who weren't lucky enough to be at the Amsterdam Bimhuis on that memorable evening in November 2008, Timeless Records has produced an admirable narrative of the occasion that transcends the boundaries of time and place.

Of the two tenors, Ferdinand Povel is probably the lesser-known to American jazz fans, but it's a good thing for the country's poll-winners that the enterprising maestro has chosen to play for the most part in the Netherlands, where he was born in 1947. Had Povel not turned down an offer to become a member of the Thad Jones-Mel Lewis Orchestra, they'd have had to step aside to make room for him at or near the top. Pete Christlieb, on the other hand, is fairly well-known, especially on the West Coast, where his wailing tenor has been gracing groups large and small for more than four decades, and for his twenty years as a member of Johnny Carson's Tonight Show band. Christlieb is as brash as Povel is burnished, and in tandem they complement one another splendidly.

No less well-matched is the sharp and attentive rhythm section, ably supervised by pianist Rein De Graaff and including bassist Marius Beets and drummer Eric Ineke, all from the Netherlands. De Graaff, at sixty-nine the group's elder statesman, first shared the stage with Povel in 1965 and has been an admirer ever since. As for Christlieb, in the early 1970s, according to the liner notes, de Graaff "managed to spoil a rehearsal when, during a break, he put on a record by an unknown tenor man called Pete Christlieb. No music was played the rest of the afternoon, as everyone was sitting around, digging this powerhouse saxophonist." As the listener will note, Christlieb hasn't changed a bit or lost a step in the intervening years, nor is Povel any less vigorous or resourceful than he was more than forty-five years ago.

The two tenors share the stage on four of the concert's six numbers, opening with Tadd Dameron's bop-era classic "Good Bait." Jerome Kern / Oscar Hammerstein's "All the Things You Are" (credited to George and Ira Gershwin) precedes Povel's ballad feature, "I Fall in Love Too Easily." The tenors return for Miles Davis' "Milestones #1" (not the better-known modal version), Christlieb is showcased on the Gershwin brothers' "Embraceable You," and the group wraps things up nicely with guitarist Jimmy Raney's bustling "Parker 51," based on the Ray Noble standard, "Cherokee." Throughout, Christlieb is his usual mercurial self, framing one exotic phrase after another, whereas Povel harkens back to the golden age of Dexter Gordon, Johnny Griffin, Hank Mobley, Wardell Gray, Clifford Jordan and their tenor peers. While there's a trace of Sonny Rollins in his vocabulary, as well as Tubby Hayes and George Coleman, there's never any mimicry, and it is Povel's voice that holds sway. The solo order, even though specified in Jeroen de Valk's liners, is hardly necessary, as Christlieb and Povel are about as dissimilar as moonlight and sunshine.

Two-tenor sessions don't come much better than this. About the only things lacking are the customary four-bar exchanges, but perhaps no one thought they were warranted. Everyone is given ample room to stretch, as none of the two-tenor tracks runs for less than ten minutes, but the time seems to fly by at a rapid clip. A persuasive concert that's a step—perhaps several steps—above most others.

Track Listing: Good Bait; All the Things You Are; I Fall in Love Too Easily; Milestones #1; Embraceable You; Parker 51.