For its second-to-last date in its 2009/2010 Fall/Winter Series, the Ottawa International Jazz Festival continued its perennial support of the Dutch music scene by bringing trumpeter Eric Vloeimans' Fugimundi trio to the Fourth Stage of the National Arts Center. Still in his forties, Vloeimans has already amassed a surprisingly rich discography ranging from acoustic dates with illustrious partners like British pianist John Taylor, bassist Marc Johnson and drummer Joey Baron to the more electrified music of his Gatecrash group. Fugimundi sits somewhere in-between; clearly the intent is chamber jazz—something Vloeimans made clear during the sound check, as he strived to achieve the proper balance of sound to fill the 150-seat room without losing the intimacy of a trio that also featured pianist Harmen Fraanje and guitarist Anton Goudsmit—but, with a surprisingly expansive dynamic range and Goudsmit's sometimes edgy, rock-centric playing, also an ensemble that wasn't afraid to let loose and play hard.

These are Dutch musicians, after all, from the same country that's brought New Dutch Swing to the jazz world, and the unmistakable zaniness (yet, still, remarkably deep playing) of artists like legendary drummer Han Bennink and ICP Orchestra. Fugimundi's combination of rich lyricism and playful intensity is unmistakable on its two releases, from which most of its 100-minute set was culled—Summersault (Challenge, 2006) and Live at Yoshi's (Challenge, 2009)—but experiencing the group live only amplified the experience. While its most recent release is, indeed, a live album from the renowned Oakland club in the United States, Fugimundi has traveled considerable distance since that October, 2008 recording. The interaction is more profound and the trio's ability to expand on largely original material written by all three members is far more unfettered, without resorting to any kind of bloated or over-extended soloing. Songs rarely exceeded 10 minutes, and were often considerably shorter; yet the trio never felt as though it was restraining or constraining itself. Quite the opposite, in fact: the performance was defined by a relentless sense of surprise—not just for the exuberant audience, but for Fugimundi also, as the players were often clearly taken aback by the unpredictable twists and turns taking place...sometimes even dissolving into fits of laughter. Clearly this is a group that has a lot of fun playing together. 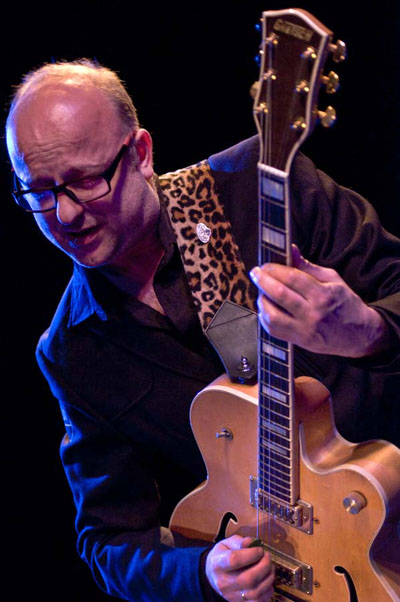 If all of this sounds as though it was nothing more than a comedy act, the 2009 Ottawa International Jazz Festival performance by Italian trumpeter Enrico Rava and fellow countryman, pianist Stefano Bollani is still fresh enough in the memory to recall that overt humor and musical depth needn't be mutually exclusive. The Italian sense of humor is different, however; and of Fugimundi's three members, Goudsmit was clearly its biggest clown. Visually expressive—singing along with his playing as he moved around the stage—and demonstrating an engaging blend of nuance, lithe speed and, at times, screaming rock stance, he was a constant source of idiosyncrasy and drive. With certain similar stylistic devices—pulling on the guitar neck to create subtle pitch shifts, and layering unusual voicings, muted lines and quirky patterns in support of Vloeimans and Fraanje—Goudsmit was like Bill Frisell...but on steroids. A far more outgoing player—as likely to scrape his strings, tap his guitar to create some percussion for the group, or suddenly burst into rapid strumming as he switched tones on his Gretsch guitar at lightning speed, he was also equally capable of soft, melodic warmth. It's no surprise that Goudsmit is this year's recipient of the VPRO/Boy Edgar Prijs 2010, Holland's most prestigious jazz award. His career may have been spent largely as a sideman, but with his own discography beginning to build, clearly this is a musician to watch.

As is Fraanje. The youngest musician of the trio (in his mid-thirties), the pianist was also the least visually comedic member of Fugimundi, but when it came to his playing it was another story entirely. A confident player with an encyclopedic mix of classical training, sophisticated harmonic vernacular and an ability to build from a whisper to a maelstrom at the drop of a hat—or, more appropriately, in response to his trio mates—Fraanje worked particularly well with Goudsmit, the two empathically intuiting each other's every move to prevent the kinds of harmonic train wrecks that are an inherent risk when placing two chordal instruments together in a freely improvising context. His accompaniment was the perfect combination of push-and-pull, as the trio collectively went wherever an idea took it. As Goudsmit left the stage, crying loudly—as Vloeimans put it, "he's upset because he's been fired"—Fraanje and the trumpeter delivered a spare and compelling version of the classic standard, "Bewitched, Bothered and Bewildered" that proved how, while the trio's music may stretch the definition of jazz, the tradition remains an unequivocal cornerstone on which Fugimundi's music is built. 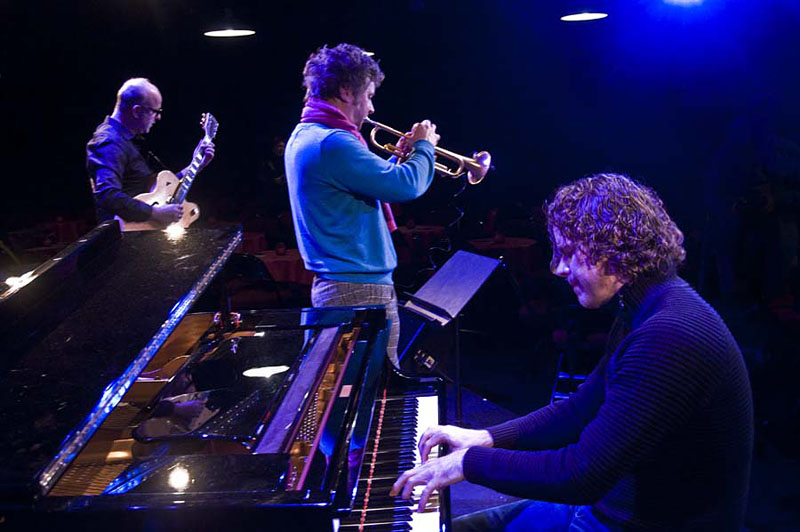 Vloiemans may be less known on this side of the Atlantic, but that's a status the needs to change. With a remarkable command of his instrument, the trumpeter was constantly exploring tonal nuances through incredibly precise embouchure; changing tone mid-stream as he went from a breathy tone redolent of Norwegians Nils Petter Molvaer and Arve Henriksen, to a tarter tone on some of the set's more overtly outgoing music; adding a touch of grit here and a touch of plangent expressionism there. At times content to close his eyes, lean back and let Fraanje and Goudsmit take the music to unexpected places—and yet demonstrating a remarkable synchronicity with them as they managed, no matter how far off-center they went, to come back together for the reiteration of a melody with incredible accuracy and intuition—Vloeimans, like the rest of Fugimundi, demonstrated a keen ability to be both reverential to the music's demands yet absolutely free and open-ended with its possibilities. His spoken introductions were slightly understated, a tad self-effacing and a lot funny, establishing a strong rapport with the audience that only served to make the performance itself all the more compelling.

The music ranged from soft and elegant to loud and boisterous; no shortage of European classicism combining with unmistakable tinges of blues and gospel, and a plaintive melancholy one moment just as likely to become an absurd, circus-like stomp the next. Unhindered by a rhythm section to create a defined pulse, Fugimundi swung hard at times, played with folkloric simplicity at others, and took advantage of their contextual freedom at every moment throughout a set that grabbed the audience from the first notes, and kept it on the edge of its seat until the very end, following a well-deserved encore.

Vloeimans' name may be new to some of his audiences here, but everyone at the Ottawa show went home knowing who he was, along with Fugimundi mates Fraanje and Goudsmit. Sometimes you have to build your audience one small step at a time. If the other dates in a 13-city tour, which took Fugimundi across Canada and the United States, were anywhere near as good as its Ottawa performance, then it's a certainty that Vloeimans is gradually building an audience in North America to match the one he's already established for several years in Europe.