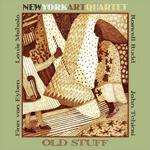 Despite their involvement in the seminal 1964 October Revolution in Jazz concert series and a few high profile gigs in Europe the following year, the short-lived New York Art Quartet remains under-sung but legendary, with only two official studio recordings to its name—the self-titled 1964 ESP debut and Mohawk (Fontana, 1965). For years the only other commercially available document of the group was an unauthorized release of live radio broadcasts made in Hilversum, Netherlands in 1965, issued as Roswell Rudd by the America label. Featuring the same touring line-up as the Hilversum session, Old Stuff helps reinforce the quartet's place in history as a cutting-edge ensemble.

Culled from two live radio broadcasts made the same year as the Hilversum date, this collection presents the quartet in front of an enthusiastic audience, capturing their freewheeling interplay with more presence and sonic clarity than the America recording.

Throughout its short lifespan, the only constant members of the quartet were trombonist Roswell Rudd and alto saxophonist John Tchicai. Bassists Don Moore, Lewis Worrell and Reggie Workman all served as sidemen, as did drummers J.C. Moses and polyrhythmic innovator Milford Graves. When Tchicai returned home to Copenhagen in 1965 to schedule some concerts, only Rudd was able to join him. Danish bassist Finn von Eyben was recruited, as was South African expatriate Louis Moholo-Moholo, whose forays into free jazz were beginning to take root in his polyrhythmic approach with his own group, the Blue Notes.

Demonstrating an interest in the entire continuum of jazz history, the group tackles Thelonious Monk's "Pannonica" (also on the Hilversum session), following their efforts on Mohawk, which featured covers of the titular Charlie Parker tune and the standard "Everything Happens to Me." This embrace of tradition in a free jazz context mirrors the then newly formed AACM's mantra "Ancient to the Future," further establishing the group's visionary concepts.

As fate would have it the New York Art Quartet disbanded at the end of 1965, briefly reformed in 1999 to play with Sonic Youth (courtesy of the band's guitarist Thurston Moore, a dedicated free jazz advocate) and recorded 35th Reunion for DIW. Old Stuff fills a gap in the discography of one of the most important, under-documented groups to come out of the October Revolution.