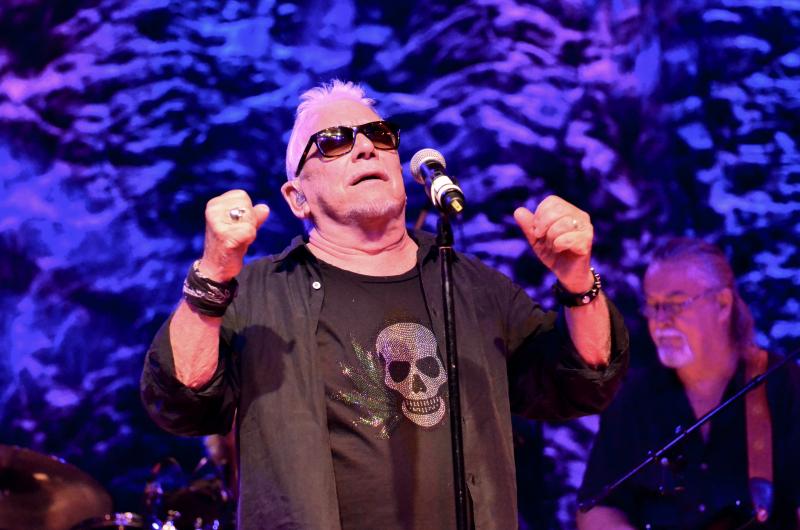 Eric Burdon is an iconic member of the '60s British Blues Invasion. Burdon's band, the Animals, along with The Beatles, the The Rolling Stones, the Hollies, the Dave Clark Five and the Kinks introduced American youth to British music, fashion and culture. As the lead singer of the Animals, Burdon was the voice behind the Animals' interpretations of some of the biggest songs that helped define the era: "Don't Let Me Be Misunderstood," "We Gotta Get Out of This Place," "Don't Bring Me Down," "It's My Life" and, of course, "House of The Rising Sun." Burdon also achieved success outside of the Animals with War. "Spill The Wine" was the center-piece of the Eric Burdon Declares "War" album (1970, MGM Records). Burdon's music is a genre-crossing mélange of rock, pop, blues, R&B, funk, psychedelia and, as Lonnie Jordan of War has commented, Latin rap.

Edgar Winter is a Texas-born and bred blues and rock singer. Winter is a multi-instrumentalist—equally adept on keyboards, guitar, saxophone and various percussion instruments. His biggest successes came in the mid-'70's, when the Edgar Winter Group scored a number 1 Billboard Charts hit with "Frankenstein" and a Top 20 single with "Free Ride." Both he and his older brother, the late legendary blues guitarist Johnny Winter, were born with albinism. Winter's music encompasses many different genres, including rock, pop, blues and jazz.

On the last Friday in August 2015, the two musicians and their respective bands appeared at Westbury, NY's NYCB Theatre. The Edgar Winter Band appeared first and during its short set proved that even after forty years, Winter can still stir an audience. His short set included the opening number "Keep Playing That Rock 'n' Roll" as well as an extended version of "Tobacco Road" (which Winter dedicated to his late brother). During the song, Winter and his band members provided interesting scat and instrumental call and response interludes.

Winter certainly allowed his band members to shine, in addition to the virtuoso instrumental responses to Winter's scatting, his guitarist, Doug Rappoport sang lead on "We All Had a Real Good Time" and included a fiery guitar solo for good measure. Winter introduced "Frankenstein" by announcing that he was "the first to play synthesizer with a neck-strap." He continued and finished his song intro, asking with a smile on his face and a gleam in his eye, "Are you ready for the monster?" The extended version of the song got the audience members into the mood. They leapt to their feet almost immediately and many were soon movin' and groovin' to the instrumental's beat. The best was definitely saved for last as the closing number "Free Ride" not only kept the crowd on its feet, it found them singing along with the iconic musician.

When Eric Burdon and the members of the current configuration of the Animals appeared on the stage, the crowd, which had been waiting in anticipation, was delighted and energized by the opening notes of "Don't Bring Me Down" (from the Animals' 1966 MGM Records release Anmialization).

During his hour-and-a-half set, seven of the dozen numbers sung by the 74-year-old Burdon were recorded by the Animals. Dressed in black, wearing sunglasses, a T-shirt emblazoned with a silver skull and open shirt over it, Burdon with his neatly cropped white spiky hair was quite the fashion plate. He wore a studded bracelet on one wrist and a skull ring on his finger.

In addition to the Animals' classics, Burdon sang three songs from his most recent release, 2013's 'Til Your River Runs Dry (ABKCO Records). Each of these songs were welcome additions to Burdon's canon. "Water" was introduced with a smile, a wink and the simple yet sly comment, "This is called 'Water.' Why? Because we can't live without it." "Bo Diddley Special," the farewell tribute to his hero featured a strong vocal and a driving Bo Diddley backbeat. During "River Is Rising" (co-written with British ex-pat and New Orleans resident Jon Cleary), a song inspired by the story of Fats Domino going missing during Hurricane Katrina, Burdon appeared to lose himself in the beauty and majesty of the music. He stretched his arms out, leaned his head back and sang the "the river is rising, carry me away to another world" lyrics .

Fairly early in the set, Burdon, the great interpreter of songs, brought Edgar Winter to the stage to play sax on a wonderful cover of Ray Charles' "I Believe To My Soul," another song that the Animals covered (and released on the 1965 MGM album The Animals on Tour). Winter stayed on stage and continued to provide his stellar saxophone accompaniment during a funky version of "Spill The Wine." The audience members were thrilled; they jumped to their feet and danced from the opening note until the song ended, all the while singing along with Burdon on the "spill the wine, take that pearl" and "spill the wine, dig that girl" choruses.

2012's Eric Burdon & The Greenhornes EP (Readymade Records) was represented by the scorching and at the same time haunting, "Black Dog," which Burdon claims is about the depression, pain and despair that he felt after slipping on ice an injuring his back a few years ago. He has been quoted as saying that after writing the song his outlook and state of duress changed for the better.

In addition to the solo offerings and the covers, Burdon and his band played Animals classic songs including the soulful "When I Was Young," "Don't Let Me Be Misunderstood" which featured a reggae beat change-up in its middle, and an extended jamming version of "We Gotta Get Out Of This Place."

The main set ended with the song for which he and the Animals are best-known. The Animals' version of "The House of the Rising Sun" topped the charts in 1964. Just prior to playing the song, Burdon said, "This is a song that just won't go away." The soulful, gravelly and down-home dirty R&B version of the song was as powerful on this night as it must have sounded over fifty years ago when it jumped out of the radio and flooded the airwaves.

After leaving the stage, the band and Burdon returned for the encore, ending the evening with a blistering bow-and-ribbon-on-the-package inspired version of "It's My Life."

Though Burdon is no longer a spring chicken. The singer has held up rather well over the years. While he didn't race around the stage, his voice was strong, clear, powerful and vibrant. The audience was mesmerized by and with his commanding presence. He and his band, and the audience as well, were clearly having a blast. The band performed with an intensity that kept these, mostly older songs, vital. Burdon was happy to interact with his audience. And, the audience...the audience loved it.