By DAN BILAWSKY
September 30, 2010
Sign in to view read count 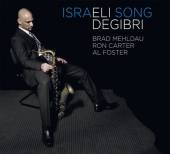 If jazz buffs were approached at the start of the 1990s and asked to list some top-flight Israeli jazz musicians, plenty of them wouldn't be able to utter a single name. That just goes to show how much the times have changed. In 2010, Israeli-born jazz musicians are among the brightest stars in modern jazz and saxophonist Eli Degibri's name is high up on this list. Degibri arrived in the United States in 1997—to attend Berklee—and he ended up in the Big Apple in 2002, where he began to make a name for himself as one of the most consistently engaging forces on the scene. While he's had the opportunity to work with legendary figures like pianist Herbie Hancock, his own recordings—up to this point—have always featured his contemporaries, such as drummer Jeff Ballard and pianist Aaron Goldberg.

With Israeli Song, Degibri moves in a different direction and, in the process, has put together what is, perhaps, one of the best small groups to show up on record this year. Brad Mehldau mans the piano chair on this recording and two legendary alumni of trumpeter Miles Davis—bassist Ron Carter and drummer Al Foster—round out the rest of the quartet. While this type of line-up might seem like a gimmick, meant to draw fans in with big names, that's not the case. Degibri has been an important presence in Foster's band for eight years and Carter connected with the saxophonist after he left Berklee to attend the Thelonious Monk Institute of Jazz Performance.

ADVERTISEMENT
Degibri's originals make up more than half of the program, but each member of the band also contributes one piece, and a pair of choice chestnuts—Dizzy Gillespie's "Bebop" and Harold Arlen's "Somewhere Over The Rainbow"—also make it onto the program. Within these selections, Degibri also takes the opportunity to settle into duo dialogues with each band member at one time or another. "Bebop" brings Degibri and Foster together, as the saxophonist positively burns over the drummer's constant comping. Foster rightly pays tribute to bop drumming pioneers like Kenny Clarke and Max Roach, but marries their ideals with his own ideas and assertions. "Somewhere Over The Rainbow" gives Carter and Degibri a chance to connect on a softer selection, while the emotionally riveting "Israeli Song"—along with "Liora"—are all about the saxophone-piano relationship. Mehldau adds some heightened drama to the former and the latter features some fun rhythmic toying.

The rest of the material hits on a variety of moods and subtle musical events are ever-present. Degibri's singing saxophone gently moves over Mehldau's roving piano on the pianist's "Unrequited," but Degibri builds to a more intense peak and seems to separate himself—sound-wise—from the band as time moves on. The saxophonist pays tribute to Carter—like saxophonist John Coltrane paid tribute to bassist Paul Chambers ("Mr. P.C.")—with "Mr. R.C." While Carter's solo here is a virtual clinic on taste and technical possibilities for the soloing string player, the way he always chooses the right notes as an accompanist—and works as a team player—is the real reason that Ron Carter is the preeminent bassist of our time. "Judy The Dog" is a peppy piece that weds swing and funk feels, and Foster is on fire during his own funk-laced "Look What You Do To Me." "Jealous Eyes"—the obligatory ballad—demonstrates brilliant pliability within the rhythmic creations of Carter and Mehldau, while "Manic Depressive" is a prime piece of gin-soaked bluesiness, complete with a terrific tenor performance from Degibri. Balance is the key to this record, and these 11 performances manage to be modern enough for the contemporary scene, traditional enough for those who don't tread in deeper waters and good enough to be considered one of the best recordings of the year.