New York City's 2016 Winter Jazzfest Marathon capped off a string of first-week performances. The running theme of the festival was transition, as musicians of all walks emphasized the collaborative spirit of their chosen profession and the metamorphic possibilities without which jazz would wither. At the heart of this year's Marathon was the ECM Records Stage at The New School's Tishman Auditorium, the architectural rhythms of which were as interlocking as those of the performers it housed.

Bound by stylistic curiosity and disregard for genre borders, the ECM family has always been a global one. For the past 40 years and then some, visionary producer Manfred Eicher has ensured that ECM remains eclectic at heart. The crosspollinations of its rosters have been as indicative of the musicians' pioneering impulses as of Mr. Eicher's genius in putting them together in the same studio. And with a rigorous release schedule that now averages out to one album per week, ECM has not merely yielded a catalog of exceptional integrity, but has become the stronghold for a new generation of improvisers and composers. The Winter Jazzfest showcase was therefore less about where the label has been than where it is going. 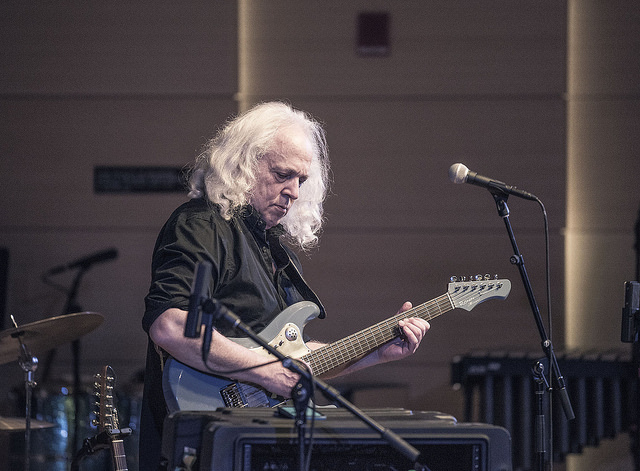 Nearly all of the artists featured were recent additions to the label's ranks. A towering exception in this regard was guitarist David Torn, whose alchemy fittingly inaugurated the event. Surrounded by an array of effects pedals and miscellaneous equipment, Torn built ambient worlds by means of multi-tracking in real time. Since first appearing on ECM in 1982 in the context of his Everyman Band, Torn has become known for his walls of sound, but what he played at The New School was like his unmistakable quaff: an apparent shock of white that on closer inspection revealed a field of gradations. As on his 2015 solo album Only Sky, Torn filled the space with an intuitive feel for structure, atmosphere, and, occasionally, melody. Throughout his capture and release of wave patterns, he consumed certain motifs while releasing others back into the wild, as it were, if only to see what they might become when they returned in digitally resurrected form. As the set progressed, it became difficult to draw the line between composition (the tunes did have names) and improvisation. Prerecorded loops appeared as signals, woven into a spontaneous tapestry and coming to a head in the desolate, Bill Frisell-like epilogue. 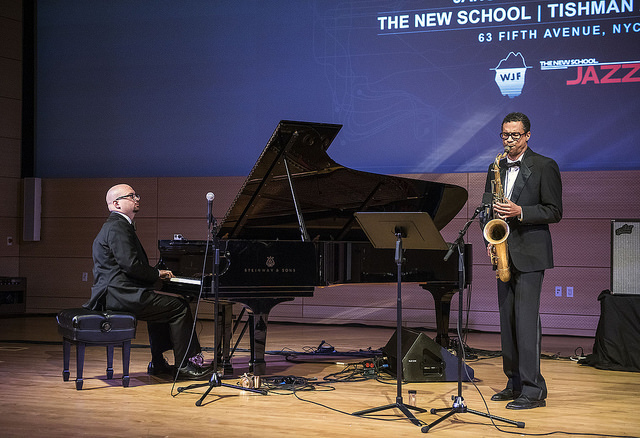 It was appropriate that the ECM showcase should begin and end with its most intimate portions. Closing out the festivities were pianist Ethan Iverson and saxophonist Mark Turner, whose duo stylings made for a whimsical experience. Iverson, with his curatorial flair, and Turner, ever the meticulous professional, complemented each other to a T. From the science fiction-inspired "We Come from the Future" to the enigmatically titled "Turner's Chamber of Unlikely Delights," Iverson's compositions were a delicious mix of the literary and the cinematic, while the Turner-penned "Myron's World" (the only tune not being premiered that night) was spoken with the directness of a child. Even more impressive than the duo's technical flourishes were its emotional virtuosities, as when, during his "Time and Tide," Iverson lifted his hands from the keys like a bird in flight, leaving Turner to venture alone. Another highlight was the etudinal "On the Beat." Marked by synchronized finger snaps at either end of the piece, it boasted delightful soloing on both sides of the equals sign before finishing with "Unclaimed Freight," an original blues in G.

Few artists embody the ECM label's evolving mission like Cuban pianist David Virelles, who plunged his hands into three distinct pools. With his Mbókò project he played out the first night with one of the festival's most challenging turns. Challenging, to be sure, not because of any musical deviancy but for a primal force of immersion. Joined by bassist Matt Brewer, drummer Eric McPherson, and two percussionists—Román Díaz and guest Frank Oropesa, the latter of the Septeto Nacional Ignacio Piñeiro—he foregrounded Mbókò's roots in secrecy. Díaz and Oropesa chanted in carabalí (or bríkamo), a language first brought to Cuba by slaves and which became the tongue of the Abakuá brotherhood around which Virelles's compositions were themed. "All the invocations have a functional nature," Virelles told All About Jazz, "referencing everyday life, work, and death, but also myths, historic happenings and/or geographic places." Hearing these invocations in a live setting was like being privy to something forbidden. But once the initially perplexed audience found purchase on the core groove that McPherson held almost continuously throughout the entire suite, it was difficult to resist. It was ritual magic as beat poetry. Striking about the performance were the ways in which Virelles exploited the piano as what it is: a percussion instrument. In the ensuing trance state, his hands moved in fits, banging at the keys or abandoning them altogether for woodblocks. Hummable melodies were almost nonexistent. It was all about states of being. 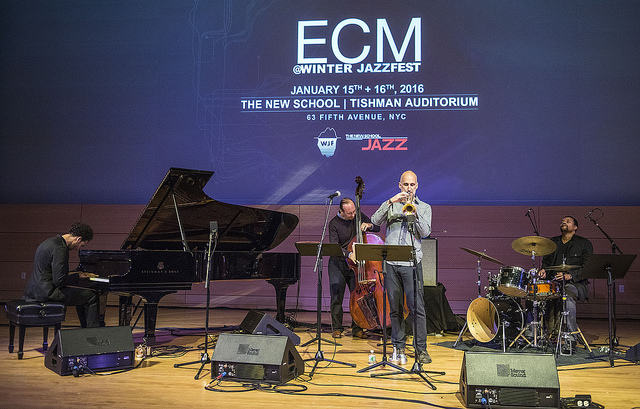 The pianist lent further alacrity to trumpeter Ralph Alessi's new quartet with bassist Drew Gress and drummer Nasheet Waits, performing new material from upcoming album Quiver. Like the opener, "Window Goodbyes," the album's title tune was an ideal vehicle for Alessi's command of vibrato, which meshed with Virelles's postmodernism in the duet "I to I." Gress, for his part, added heft, soloing robustly in "Do Over" as Waits played more around than on the beat. From seedling to tree, these soundings were colorful and engaging. It was the aural equivalent of unfolding a complex origami figure, leaving one to marvel at the creases that went into its formation.

Before this, Virelles made a second appearance with the Chris Potter Quartet, featuring also bassist Joe Martin and drummer Marcus Gilmore. The band played world premieres of tunes so new they didn't have titles. Potter, a natural multi-reedist, switched from tenor and soprano saxophones to bass clarinet with panache. The authority of his tenor evoked a range of influences, from Sonny Rollins to Michael Brecker, but with personal flair. His horn seemed to sing of its own accord, favoring the upper registers and dipping low only when such emphasis felt organically necessary. His composing was just as healthy. Potter was also openly appreciative of his musicians, whose every note he took in with respect. Whether Martin's early solo or Virelles's spindly accents and horizontal digging, each contribution felt in service of Potter's vision. But it was arguably the man with the sticks who made the biggest impression. A guru at the kit, Gilmore matched Potter's narrative arcs with equal centeredness and prophecy. A highlight. 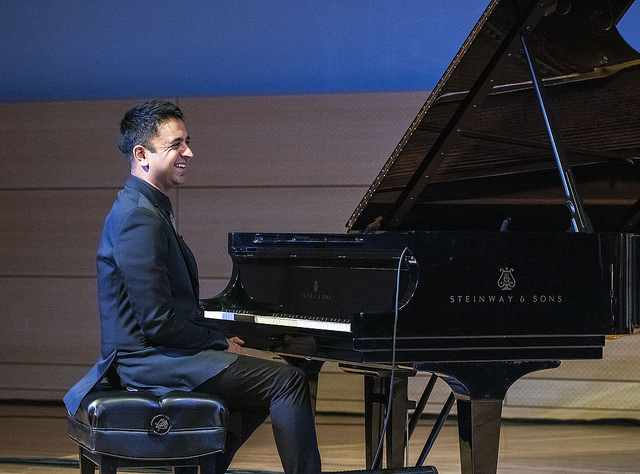 Gilmore's presence was also triply felt. As part of the Vijay Iyer Trio with bassist Stephan Crump, he brought not only the popcorn but the butter and salt to go with it. He was intriguing at his most delicate, working through mosaics by force of urban suggestion. In combination with Crump's thick description and noteworthy arco playing, he went from waltz to wonder with the flick of a wrist. Iyer was the glue to their pages, and brought his painterly sense of the keyboard to full fruition over six tunes. He imparted melodies to the shadows as might a trip to a longed-for place result in a photograph. From dawn choruses to noir-ish scenes, he attended to every aspect of production with perfect pitch and synesthetic pleasure. 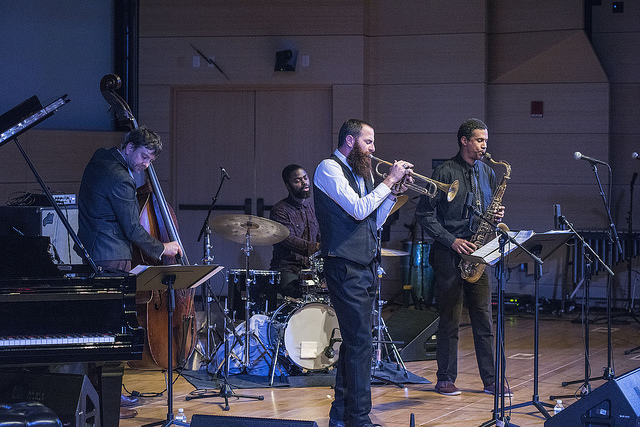 One might apply the same characterization to the Mark Turner Quartet. Featuring trumpeter Avishai Cohen, Martin, and Gilmore, the band released its album "Lathe of Heaven" in 2014 to unanimous acclaim and hit Winter Jazzfest in preparation for a follow-up. What was clear from the through-composed "Rock Two" was that each member really knows how the others' instruments work. The leading tenor and trumpet were edgy yet thoroughly accessible, evoking the smoother side of John Zorn's Masada outfit and, by association, the harmonies of Ornette Coleman. A long bass intro led into "The Edenist," an emblematic tune for its balance of textures. Over a butterfly-kissed snare, Turner punched some prime improvisational tickets, while Cohen rode the county line without fear of arrest. But this was the rhythm section's beat all the way, the ever- adaptable Martin priming the horns for their fiery relay while Gilmore luxuriated in the breadth of his invention. "Ethan's Line," named for Iverson, had a more jagged work flow. The closer, "Unacceptable," was anything but, its staccato theme a master class in synchronicity that set candlelight from Cohen like a diamond in a ring.

Yet another artist wearing multiple hats was Craig Taborn, who first gave an astonishing solo piano performance. He played two fully improvised pieces that were as effective as anything Keith Jarrett has ever recorded in that vein. Music was flowing from his fingers before he even hit the bench. A four-note motif, with pregnant spaces between reiterations, brought dreamlike formlessness to the fore. The control required to evoke this feeling was so immense that it almost threatened to explode. The second piece was a more fragile method of seeking. Taborn ended with "Speak the Name," which appears on his 2013 trio record Chants. The sounds he produced here were beguiling, as if by means of prepared piano, but in actuality were the result of Taborn's unusual and effective use of foot pedals. As Taborn revealed backstage, "I try to see how far I can go without preparation, that's the thing. Because preparation is preparation—in a weird way it almost gets in the way of improvisation. Because you set it up to do this one thing." Such contradictions were integral to his approach as a Steve Reich-like arpeggio in the left hand led to wayward roaming in the right: a dance of the knowable and unknowable. 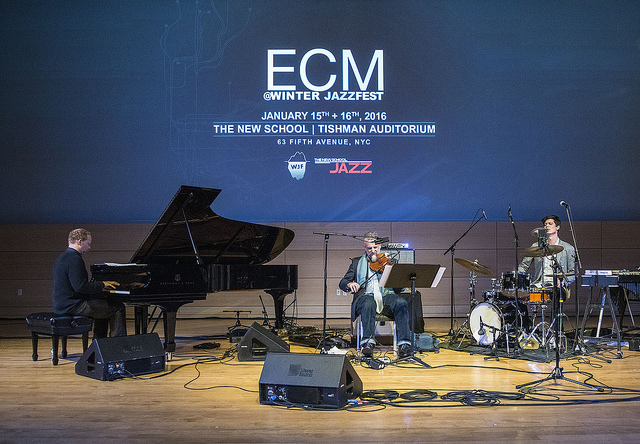 Taborn thinks with his fingers, each the synapse of an external brain. Nowhere was this so apparent than in his trio with percussionist Ches Smith and violist Mat Maneri, another highlight. Each piece married composed and free elements. Smith switched between vibraphone and drum kit, while Maneri employed a pitch bender linked via pickup to his viola. The purity of latter's tone was downright spiritual, even when fed through a distortion pedal. Smith was a true percussionist, at once setting and deconstructing each scene in miniature, but taking care to be flush with his surroundings. Their performance was especially involving, as when Maneri unplugged his instrument and played in the aisle for a spell before returning to his accoutrements. Somewhere between a punch and a caress, the trio worked through material from its upcoming album The Bell, the title piece of which tied the final knot of their set. This was music to be appreciated behind closed eyes and which set an exciting precedent for ECM's endorsements.