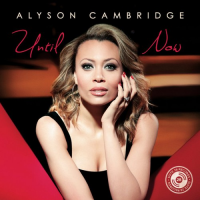 Soprano Alyson Cambridge's opera bona fides are easily recognized on Until Now. Opera chops translated into jazz often end up as effective as the translation at the center of the movie The Fly (20th Century Fox, 1958 and 20th Century F, 1986). Yes, it is just that scary and often misguided. But here is the rub. Cambridge ensures success by injecting a potent element of cabaret into her recording, one big enough to lull us into a Broadway-nostalgic pipedream of yesterday, and in this particular Xanadu did Kubla Khan A stately pleasure dome decree.

Skip right over to "The Man I Love" and see what I mean. This is so beautifully over-the-top that it can only be properly appreciate. She follows that old piece with an orchestral "Every Breath You Take" (The Police) propelled by Andy Einhorn's piano, though this arrangement veers perilously close to any dozen of such by Jim Steinman. Still, it is incredibly fun. Black Coffee," and "It's Too Darn Hot," the latter being appropriate as a second in A Westside Story. Stylistic eutectoids like this are a dicey gamble, but Cambridge and her fine band bring this recital off in grand style that is as informative as it is entertaining.

Fever’ Black Coffee; Night and Day; Diamonds are a Girl’s Best Friend; Bill; Just Another Rhumba; The Man I Love; Every Breath You Take; Too Darn Hot; I Had Myself a True Love; It Ain’t Necessarily So; Can’t Help Falling In Love; Save the Best for Last.