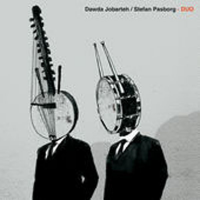 Dawda Jobareth and Stefan Pasborg's Duo is unique on more than one level. A Gambian native, Jobareth is an authentic West African griot. The term—broadly associated with that region's storytellers/oral historians/minstrel artistic class—applies only to authentic griots, though the expression is widely borrowed or misused. Also unusual is the diversity of music that Jobareth has embarked on at this early stage of his career. His debut album, Northern Light, Gambian Night (Sterns Africa, 2011) was a highly acclaimed amalgamation of traditional and modern African music with touches of more global influences. Duo, more often than not, veers toward improvisational creative music frequently with a heavy metal aspect to it.

Jobareth had grown up as a drummer in Gambia, playing concerts from the age of twelve. Only upon his migration to Denmark—as an adult—did he take up the kora, the traditional instrument of griots in West African. As part of the centuries-old oral tradition of the region, music for the instrument was not written until the twentieth century. The twenty-one string lute/harp doesn't neatly fit in a single category of instrument, sometimes sounding like a harp, sometimes like a guitar. Despite coming to the difficult instrument later in life, Jobareth is considered one of the best kora players in the world.

A native of Denmark, Pasborg is a Danish Music Awards winner who has worked with Miroslav Vitous, Ellery Eskelin, Tim Berne, Palle Danielsson, Michael Formanek and Tomasz Stanko, among many other notable artists. He began playing at the age of three, later studying at the Copenhagen Jazz Conservatory with Niels-Henning Orsted Pedersen, Ed Thigpen and other notable names. One of the co-founders of the record label, ILK Music, Pasborg is both highly knowledgeable and audacious, and with his group Ibrahim Electric, has produced an array of sounds from festive to isolated and provoking.

There is a blending of the natural styles of both players, but the overall vibe of Duo leans more toward the spacey, edgy fusion of Pasborg's Ibrahim Electric. Listening to that band on "The Afribians Are Coming" from Rumours from Outer Space serves as a precursor to much of this new album. Charles Mingus' "Better Get Hit in Your Soul" is searing, with its cracking, driving drums and the kora electronically manipulated to sound like a hybrid of the its natural characteristics and that of an electric guitar. Ornette Coleman's "Dancing in Your Head" is laced with the particular flavor of West African blues coursing through a dream-like, sing-song theme.

Don Cherry's "Mopti" and Albert Ayler's "A Change Has Come" are full of bristling energy, distortion and electronic effects and like "Bells," Jobareth uses these covers to expand the sonic scope of the kora while Pasborg vacillates between flashes of noise and subtle changes in course. Several pieces are more along the lines of Jobareth's earlier, more traditional West African roots. A different kind of experience as it allows for a more directly connected appreciation of Jobareth's kora playing and rich vocalizing and Pasborg's more nuanced approach to the drum kit and the Indian gongs.

Duo is an album that is beyond genre and at times quite far-reaching. The emotionally and electrically charged cover pieces are aggressive, shifting and challenging as they deconstruct sound and create an organic alternative to conventional expectations. The more customary pieces still manage to merge African tradition, world-beat percussion and unusual instrumentation to produce a fundamentally innovative and expressively stimulating sound.

Better Get Hit in Your Soul; Dancing in Your Head; A Change Has Come; Mali; Kaira; Bells; Mopti; Marlong; Sundiata.