By Karl Ackermann
April 9, 2019
Sign in to view read count 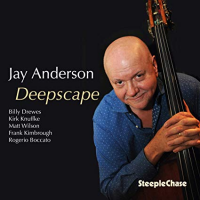 Jay Anderson took up the acoustic bass as a pre-teen, earned a Bachelor's Degree in Performance from CSU and cut his teeth playing with the Woody Herman Orchestra, right out of school. His deep resume includes classical performance with the Australian Chamber Orchestra, alternative music with Frank Zappa and Tom Waits, and pop with David Bowie.

Anderson has been a part of multiple Grammy-winning projects, most recently the Maria Schneider/Dawn Upshaw Winter Morning Walks (Artists Share, 2014). The hundreds of releases in his jazz portfolio are too many to list but with names such as Paul Bley, John Scofield, John Abercrombie, Donald Byrd, Clark Terry, Bob Brookmeyer, Phil Woods, Joe Lovano, Dave Liebman, Harold Land, and Kenny Wheeler, the surface is barely scratched. Anderson has released only two recordings as a leader, both long ago on the DMP label: Next Exit (1992) and Local Color (1994). Anderson's Deepscape continues the bassist's long relationship with the SteepleChase label and gives listeners a long overdue opportunity to revisit the gifted musician and composer.

The eleven selections on Deepscape are presented with flexible group formatting from solo to quintet and Anderson brings in top talent including Frank Kimbrough playing harmonium on three tracks. The two had worked together in Schneider's orchestra as did percussionist Rogerio Boccato. The journeyman reed player Billy Drewes, drummer Matt Wilson, and cornetist Kirk Knuffke, all of whom have worked with Anderson in the past.

Anderson gives us a broad range of styles with Keith Jarrett's "Shades of Jazz" and "Southern Smiles" touching on the pianist's unique swing-gospel feel of his 1970's quintet. The eclectic set addresses Anderson's affinity for the classics as he takes on Morton Feldman in a nicely improvised reworking of "Rothko Chapel." The group captures the spirit of Gil Evans with "Time of the Barracudas," here with an atypical rhythm. The horns tackle Branford Marsalis' difficult "The Mighty Sword" and Knuffke and Drewes contribute outstanding solos on Jim Pepper's "Witchi-Tai-To."

The musicianship is excellent throughout Deepscape but the album particularly shines in the smaller, quieter settings. Anderson and Kimbrough perform a duo on a beautifully mournful version of "Tennessee Waltz." The bassist's solo pieces, Billy Joel's "And So it Goes," and his own title track may suggest Charlie Haden's work on American Dreams (Decca, 2002), minus the treacly strings. Deepscape has a bit of everything but it holds together well, and it's a pleasure to hear Anderson.