By BRUCE LINDSAY
February 19, 2015
Sign in to view read count 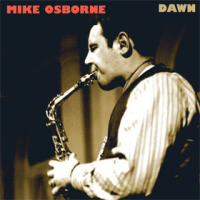 Alto saxophonist Mike Osborne's career was relatively short—barely 20 years between his first gigs with the pioneering Mike Westbrook Band and his retirement from the music scene because of mental health problems in 1982. His discography is lengthy, but albums as leader are rare. Dawn draws together recordings from three relatively early sessions in Osborne's career—early, but testament to the maturity of his playing and writing. It's exciting stuff.

Osborne recorded the first six tunes in London, during two gigs in August and December of 1970, with Harry Miller on bass and Louis Moholo-Moholo on drums—the recordings predate both of the trio's albums. The venue isn't identified, but occasional polite applause suggests a small club or theatre. The remaining four tracks—featuring Osborne and Miller with tenor saxophonist John Surman and drummer Alan Jackson—come from a June 9th 1966 studio session at London's Regent Sound, Osborne's first known recording session and Surman's second.

These dates are worthy of note. By 1966 pop had eclipsed jazz as the sound of young Britain. By 1970 the rise of progressive rock meant that many forward-thinking jazz players were gaining popularity through collaborations with outfits such as King Crimson—Miller and Keith Tippett appear on Islands (Island, 1970)—and the Canterbury Scene bands.

Osborne himself collaborated with folk guitarist and songwriter Mike Cooper, alongside his career in the top flight of UK jazz. His work with Stan Tracey, Westbrook and others—notably Chris McGregor's Brotherhood Of Breath and, with Surman and Alan Skidmore, the saxophone trio S.O.S—is testament to his place at the head of the UK scene.

Dawn offers further proof of Osborne's talent. His own compositions, such as "Scotch Pearl" and the surprisingly catchy "TBD," are bursting with life, tunes that celebrate the joy of making music with Osborne's alto weaving complex, snaking but melodic lines. "Dawn" and "1st" demonstrate his more reflective approach to composition and playing, akin to the spiritual jazz of John Coltrane or Pharoah Sanders (whose "Seven By Seven" gets a bouncy, joyous, treatment from the 1966 quartet).

Across much of this music Miller plays what could be termed a walking bass line. However, the term diminishes his power and his pace. The lines jog, at least, and in full flow on Herbie Hancock's "Jack Rabbit" he's playing at a gallop but never missing a beat. Moholo Moholo and Jackson match that combination of strength and musicality. Surman's approach is calmer than the others,' his warm, full, tone proving to be an ideal partner for the tighter and more frenetic Osborne sound.

Dawn is an important historical document. That alone justifies its release. Of course, historical documents don't always entertain—that's not their primary function. Thankfully, Dawn is historically important and entertaining. Osborne and his colleagues are on terrific form, bursting with ideas and barely controllable energy, a reminder that late-60s UK jazz may have operated in the commercial shadows but it basked in the creative sunlight.