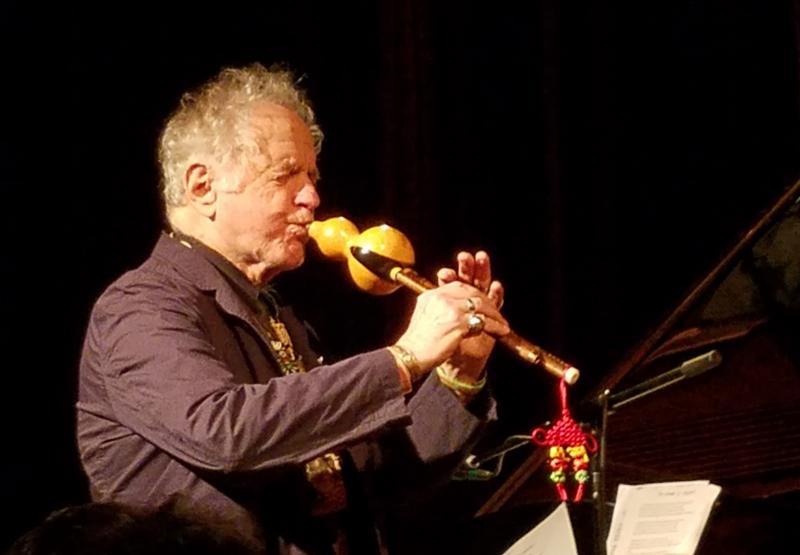 Ever a celebration of our true angel hearts and creative selves, David Amram's irrepressible spirit (he did turn 87 on November 17th) and margin-mashing musical journey (Phil Och's "When I'm Gone" as a sweet jazz standard anyone?) made this, as it does and all his concert appearances, a glowing testimonial not only to his colorful and tireless history, but to our own sense of self in a Twitter-storm world.

After introducing his band -bassist Rene Hart, drummer Kevin Twigg, and son/percussionist Adam Amram—Amram then boarded us into his time machine to stop just about precisely 1955 when, while playing with Charles Mingus he met Sonny Rollins who played him "St. Thomas" and the night began with a dancing world beat, Amram blowing his twin pan flutes, banging the beat on cowbell, piano bench, anything within reach. "Creativity is resistance,"we both agreed earlier in the evening when we spoke, and he set about showing how music is found everywhere. "Waltz From After The Fall" the music he wrote for Arthur Miller's 1964 play of the same name, expanded the waltz to its limits with Hart holding down the winding groove as the maestro explored his piano, digging deeper into his melody.

As is his way of connecting everything and everyone, Amram's stories abounded. Sincere and self deprecating ("who knew my speedometer would go this long") he told of his first NY Philharmonic residency (he was days away from taking a job with the post office when the letter came from Leonard Bernstein; arguing that all music belonged in classical music with Eugene Ormandy; joking about Allen Ginsberg blocking the exits to sell his books; and of course his life-affirming friendships with Woody Guthrie and Jack Kerouac. Intro'ing Woody's elegiac "Pastures of Plenty" with whispers of bass and percussion, Amram took to the Chinese hulusi, a traditional gourd wind instrument, to state the theme before taking his seat at the piano to construct a slow, rolling blues, singing the still triumphant lyrics " We'll work in this fight and we'll fight till we win." He then set the stage for an elongated, beat shifting, rap crazy, and glockenspiel solo (courtesy of Kevin Twigg) theme to the Beat Generation "Pull My Daisy." "Never let good taste stand in the way of good fun," he advised, before recalling Fidel Castro roasting chickens in Harlem (1960) and his musical jaunt to Cuba with Dizzy Gillespie in '77, then jammed on a Cuban beat while urging the audience to clap along. "Anytime you get a chance to do something beautiful, do it," he advised, before a stunningly honest and emotional reading of Louis Armstrong's "Wonderful World" assured that giants still walk this battered, wonderful world.