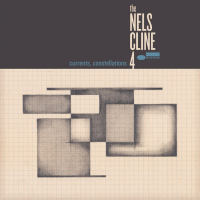 When one pauses to consider that, for a decade plus, Cline has had plenty of practice shaping and crafting the heartfelt yet elliptical, often vaporous melodies and songs of Wilco leader Jeff Tweedy, then, when coupled with his own wild, margin-less creativity, the pointillist, textured music found on Currents, Constellations comes as no surprise and great welcome. He and Lage simply play as if of one mind, unglued from any preconceived notions or tight-ass dogma. "Swing Ghost '59" follows the fast acting "Furtive" by running the gamut of finger-picking blues stroll, bandstand swing-hard rock with an effortlessness that will make most envious. Lead single "Imperfect 10" harkens back to rocker Jeff Beck's raucous and ultimately successful jazz-rock experiments of the mid-70's. And while we're in the wayback machine, the lush and hypnotic weavings of "As Close As That," Carla Bley's peacefully web-like "Temporary," and the elongated "River Mouth (Parts 1 & 2)" do recall an emergent Pat Metheny. But whereas Metheny had keyboardist Lyle Mays adding both depth and dimension to his explorations, Nels Cline relies on his and his edgy, accompanying three to manifest the exhilarating intent and beauty of talent and imagination.