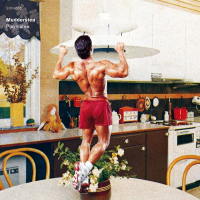 The amusing cover art is a take-off on a 16th and 17th century Flanders and Netherlands tradition of still life themes known as vanitas (vanity) paintings that basically portray aspects not deemed important when it comes down to living a fruitful life. Somehow, this experimental Scandinavian trio ties all of these connotations into four distinct tracks, "Private Pleasure 1—4."

Akin to life's endless trail of diversions, moods, and routes to happiness, these four pieces are executed with largely unconventional tools of the trade, including objects, microtonal tuba, friction and tape-loops that often equate to fluctuating acoustic-electronic tone poems. At times, analogies to semi-controlled noise making sprees, seasoned with highly expressionistic electronics-based minimalism and remembrances of composer and music theorist John Cage come to fruition. During several movements the trio adds sharply pointed angles to a horizontal musical plane via numerous aberrations. No doubt, the element of surprise is an underlying dynamic throughout.

The musicians cast a net complete with alien dialogues and unorthodox sound-sculpting motifs amid variances in pitch and prismatic choruses, loaded with contrasts that vaporize and reform into fleeting storylines. "Private Pleasure 2," sounds as though Martin Taxt is blurting breaths of air circulating through his microtonal tuba, shaded with electronics driven sounds of raindrops, and sparsely populated insects in a tropical rainforest during the dead of night. However, "Private Pleasure 4," features oscillating pulses, ethereal backwashes and creaky treatments akin to a rather unsettling dreamscape. And while this may read like it's an austere or overly cerebral presentation, the musicians' lighthearted escapades effectively balance the odd contrasts and jagged song-forms with an omnipresent entertainment factor that contains magnetic attributes.