By Karl Ackermann
October 16, 2015
Sign in to view read count 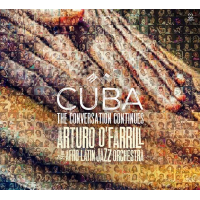 "I believe that there is no country in the world including any and all the countries under colonial domination, where economic colonization, humiliation and exploitation were worse than in Cuba...in part owing to my country's policies..." —President John F. Kennedy, October 1963

Revolution and musical genres share the characteristic of having an embryonic state. While the United States and Russia bore witness to the 1989 fall of the Berlin Wall and the symbolic end of the Cold War, part of that war refused to end. An economically strapped Soviet Union withdrew support for the island nation of Cuba and the ideologically muddled US would not forgive the offenses of Fidel Castro despite years of supporting his ruthless predecessor. The onetime vacation paradise of Las Vegas mobsters, US politicians and corporate predators became a poor, weather-beaten relic with the exception of its art community. When Mikhail Gorbachev's perestroika took hold in the Soviet Union, the halo effect—if not the economic benefit—was felt in Cuba. Cautious optimism led to a slow shift back toward the in-country evolution of Cuban music after years of talent migrating to more culturally forward thinking countries.

Like the music of the US, Cuban music has its primary origins in West Africa and the colonizing counties of Europe, chiefly Spain but also France. The creole elements were well entrenched when the country's music began to have more impact on salsa, tango and Afro beat styles. But jazz is where the Cuban sensibility has most greatly enhanced another genre through folk forms and earlier cultures and unique regional rhythms. There seems to have been an innate sense within the country that spoke to a cultural emergence that would be defined by the oppression and struggles of the past and a new order to come. Wisely, the purveyors of the movement would not shy away from the stability of nostalgia nor reject the rectitude that demanded some groping for a way forward.

Pianist and composer, Arturo O'Farrill was born in Mexico City, the son of famed Cuban composer/trumpeter Arturo Chico O'Farrill, who fled the regime of the US-backed dictator Fulgencio Batista in 1948. The younger O'Farrill crossed paths with the like of Count Basie, Dizzy Gillespie, Gerry Mulligan, and Stan Getz as well as more modern Latin musicians of that era such as Tito Puente. When the normalization of relations between the US and Cuba was confirmed by the administration of President Barack Obama, O'Farrill and GRAMMY winning producer Kabir Sehgal were in a studio in Havana and quickly realized the enormity of the situation. O'Farrill designated a selection of composers from both the US (Dafnis Prieto, Michele Rosewoman and Zack O'Farrill) and Cuba (Alexis Bosch, Cotó Juan de la Cruz Antomarchi, and Michel Herrera) along with others, to get into the studio within forty-eight hours of President Obama's historic proclamation.

The energy and buoyancy of political events led to Cuba: The Conversation Continues; a commemorative celebration this historical transition. The two-disc set opens with Prieto's "The Triumphant Journey," a swirl of horns and percussion that wraps up with powerful brass and reeds. Commissioned by the Apollo Theater and written by O'Farrill, the twenty-one minute "The Afro Latin Jazz Suite" consists of four movements and strong performances from Rudresh Mahanthappa on alto sax and trumpeter Jim Seeley. As some of the movement titles imply, the suite is influenced by Islamic Northern Africa, Western Africa and the Americas and it is the expansive centerpiece of the first disc.

Guest pianist Alexis Bosch infuses his slowly building composition "Guajira Simple" with tension while Rosewoman's "Alabanza" is a highly textured amalgam of ethnic Nigerian, soul and jazz influences. Wrapping up the first disc, the vocalizations of Bobby Carcassés—including some impressive scat singing—dominate "Blues Guaguancó," a tune that wavers between mambo and bop. Interspersed are fine solos from Bosch, bassist Gregg August and trumpeter Jesusito Ricardo Anduz. The second disc opens "Vaca Frita" and it is in a very different vein given the presence of DJ Logic's turntables. The turntablist and O'Farrill had previously worked together on O'Farrill's The Offense of the Drum (Motéma Music, 2014). The piece also features third-generation O'Farrills with composer/drummer Zack and trumpeter Adam O'Farrill on hand.

Even without the current US/Cuban political events Cuba: The Conversation Continues would have been an epic production. O'Farrell surrounds himself and the Afro Latin Jazz Orchestra with performers and composers who speak to a potentially global perspective as well as new audiences for the music of the Caribbean region. The album is a sprawling, adventurous collection that crosses genres and political borders, respecting tradition while forcing boundaries. This is O'Farrill's most ambitious work and—especially for those involved in the project—a once in a lifetime experience.