Born in Brooklyn N.Y., Earl received his first musical training from his father (a very gifted amateur musician) who saw to it that the entire family became proficient at playing brass instruments. While attending the High School of Music & Art, he studied trombone with John Clark, Jack Jeffers, Alan Raph and Benny Powell. It was during this period that he also developed relationships with composer William S. Fischer and tuba player Howard Johnson. At Mannes College of Music, he studied Bass trombone with Simone Karasick and tuba with Thompson Hanks. Later he studied arranging with Slide Hampton and Bob Brookmeyer. He also studied privately with the famous brass teacher Carmine Caruso.

He served as guest conductor for the Brooklyn Philharmonic, wrote large ensemble compositions for (and directed) the Musicians of Brooklyn Initiative Big Band, (an organization founded by Lester Bowie, Oliver Lake and others.) Mr. McIntyre was also musical director for Town Hall’s “Ragtime to Broadway” featuring music from 1900-1909. His arranging and orchestrating credits include Roberta Flack, Luther Vandross, the “Saturday Night Live ” band, Lester Bowie’s Brass Fantasy, Johnny Copeland, Cedar Walton, Renée Manning, the Mel Lewis Orchestra, The Mingus Big Band, Elvis Costello, Steve Turré, Bob Stewart, Jon Faddis, J.J. Johnson, the Art Ensemble of Chicago as well as Cannonball and Nat Adderley. Earl has received the National Endowments of the Arts grants for jazz study, jazz composition and instruction. He is a recipient of grants from New York State Council of the Arts; Meet the Composer, and others. He has been nominated for the ” Most Valuable Player of The Year ” award from the NARAS as well as sitting on various arts and grants panels. He appears on at least three Grammy award-winning records as well. He has numerous film & Broadway credits and been involved in a number of Tony winning productions. Earl has been on faculty at Long Island University, The New School for Social Research, SUNY at Purchase and the Wachovia “Jazz For Teens” at the New Jersey Performing Arts Center .

Mr. McIntyre has also been a teaching artist for Young Audiences and Brooklyn Arts Council . He’s done clinics through various arts organizations as well. At the Brooklyn Conservatory of Music, he served as Director for the Jazz division. He also produced the “Jazz at The Conservatory” series at The Brooklyn Conservatory presenting artists like Jimmy Heath, Benny Golson Roy Hargrove, Taj Mahal, the Persuasions and many others. His new CD release is “Brass Carnival & Tribute” Show less 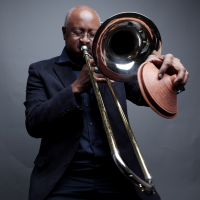 All About Jazz musician pages are maintained by musicians, publicists and trusted members like you. Interested? Tell us why you would like to improve the Earl McIntyre musician page.