By Troy Collins
December 26, 2009
Sign in to view read count 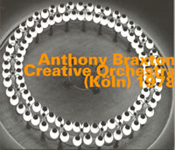 The 1970s were an exceedingly fertile time period for composer Anthony Braxton, whose considerable output was primarily documented by Arista Records, including his Creative Orchestra Music, which encapsulated the entire history of jazz—from Scott Joplin to Albert Ayler. One of these albums, the seminal Creative Orchestra Music 1976, was recently reissued as part of Mosaic Records' Braxton box set. Recorded live in Koln, Germany, on May 12, 1978, Hatology's double disc reissue, Creative Orchestra (Koln) 1978, presents interesting contrasts to the earlier Arista studio session, the most obvious being Braxton's sole role as conductor.

Braxton's absence as a soloist is noticeable, but not detrimental, as the ensemble's phenomenal saxophone section includes Dwight Andrews, Marty Ehrlich, Vinny Golia, J.D. Parran, and Ned Rothenberg. The brass section boasts such equally notable improvisers as Wadada Leo Smith, Kenny Wheeler, Ray Anderson, and George Lewis, among others. A fully fledged touring ensemble by the time of this recording, the band's intimate familiarity with Braxton's notoriously intricate compositions is rendered with palpable enthusiasm, making these dauntingly complex charts sing off the page. Interestingly, a number of these performers were students at the time. In retrospect, this collection reveals Braxton's longstanding commitment to providing students with performing opportunities, a detail reinforced by his recent discography.

Another primary difference between this date and the Arista session is the electronic contributions of synthesizer player Bob Ostertag and guitarist James Emery. Book-ending the "Language Improvisations" that open the date, Ostertag's warbling synth and Emery's scorching fretwork oscillate with unfettered abandon, pitching the electro-acoustic big band into futuristic territory. After the surreal opener, "Composition 55" explodes with a rash of intervallic counterpoint; the horns careen with Charles Mingus-like ardor and a prismatic display of vibrant tonal colors.

The extensive use of "Language Improvisations" as interludes between seemingly disparate tunes provides seamless segues between divergent styles, lending the date a sense of cohesion missing from the studio recordings. The sheer density of the music precludes a point by point analysis of every tune, but Graham Lock's meticulous liner notes are rich with detail. Creative Orchestra (Koln) 1978 is an endlessly intriguing concert recording that warrants repeated spins, offering new surprises with each listen.