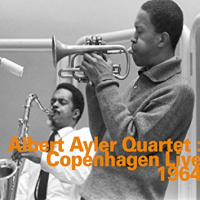 It's almost as if the phenomenon that was saxophonist Albert Ayler was just a dream. Nearly fifty years after his death, listeners (and musicians, for that matter) are still catching up to him, and realizing his gift. His life, like that of Charlie Parker, ended at age 34. But where Parker (an originator of bebop) developed in the musical world of Kansas City, Ayler seemingly stepped off a spaceship to deliver his provocative free jazz.

Ayler's early career, in the Cleveland R&B scene, didn't lay the groundwork for his revolution. Perhaps it was his US Army band tenure in France, and subsequent relocation to Sweden that facilitated his conversion; a sort of Biblical Ezekiel receiving a message from heaven. When drummer Sunny Murray and pianist Cecil Taylor first heard the saxophonist in Europe, their skepticism quickly turned to belief. His powerful sound, which legend tells us could crack ceilings, arrived fully formed. The fact that no one was ready for Ayler in 1962, begs the question, are we now? Today, you can listen to saxophonists John Dikeman and Mats Gustafsson, the modern descendants of the Ayler sound and thankfully hear some of the music he made in his short life.

The incendiary sounds, a free jazz aficionado's manna from heaven, are lovingly remastered here, and Derek Taylor's liner notes give a historical context to this session. The quartet opens with the now familiar piece "Spirits," a catch-me- if-you-can acceleration of energy. Peacock's agility at the bass is equaled by the grace with which he maintains the architecture of the music. While Ayler is blowing down walls (and tradition), Cherry acts as his lieutenant, at times escorting Ayler before pushing him into new directions. Where brother Don Ayler was brash, Cherry favors a subtler sound. The eeriness of "Saints" is heightened by Murray's ghostly moans and his abandonment of constant pulse for a fragmented sound.

Call this music revolutionary and free. But also recognize that the prophet Albert Ayler was on earth to deliver this message, one that found followers in the master John Coltrane, then Gato Barbieri, David Murray Paul Flaherty, and rock icon Thurston Moore.