By TROY DOSTERT
February 25, 2019
Sign in to view read count 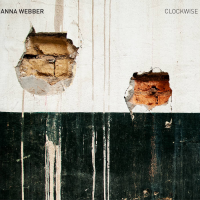 Although she's a horn player by trade, Anna Webber has always had a fascination with percussion as a basis for her idiosyncratic compositions. With pieces that build in complexity, with rhythms that are continuously reformulated, Webber produces music where a groove is usually present, yet it's typically filtered and recontextualized in surprising ways. Fortunately she's had terrific percussionists over the years—especially John Hollenbeck, who has played on her superb trio recordings with pianist Matt Mitchell, most recently on 2016's Binary (Skirl). For her larger lineups, she's sometimes gone with a two-drummer approach, as on her septet album Refractions (Pirouet, 2015), where Max Andrzejewski and Martin Kruemmling kept the rhythms churning.

On Clockwise, Webber again goes to a septet format, albeit with Ches Smith holding the drum chair by himself. Even so, this is an album with rhythm at its core, requiring the utmost in dexterity from all the players. And it's rhythmic in concept as well: specifically, drawing its inspiration from the percussion-based works of contemporary classical composers like Iannis Xenakis, Milton Babbitt, and John Cage, which Webber uses as source texts for her own creative explorations. This provides an ideal opportunity for Webber to fuse the musical worlds of composition and improvisation, an abiding mission that has fueled all her recordings.

The classical touchstones for the music might at first suggest a staid or imposing formality, but not in Webber's hands, as her love of motion permeates these pieces. There is a palpable energy animating pieces like the infectious opener, "Kore II," which builds off fragments of Xenakis's Persephassa in generating layered lines that threaten to spin out of sequence but are somehow held together, due in no small part to Smith's razor-sharp intuitions. And on "Array," Smith's shuffling brushwork offers an even more groove-worthy foundation for stimulating collective interjections from all the musicians.

Overall, texture is more important than melody here, with Webber's use of the distinctive timbres of her ensemble a defining feature of the record. Tenor saxophonist/clarinetist Jeremy Viner and trombonist Jacob Garchik provide complementary forces to Webber's assortment of flutes and tenor sax, and cellist Christopher Hoffman offers his own colorful palette to enhance the ensemble's sound. Add in the dynamic contributions of bassist Chris Tordini and, once again, Mitchell on piano, and Webber has quite the toolkit for her dazzlingly intricate creations. Nowhere is this better realized than on "Idiom II," a devilishly challenging piece built around layered horn lines that are slightly off-kilter, with a rhythm that is just slightly out-of-center, but yet somehow maintaining enough precision to generate possibilities for the players to build their own improvisational statements within the welter of sounds.

While the music's complexity is undeniable, its sheer inventiveness provides more than enough incentive to come back to these pieces for multiple encounters. Listeners who crave accessible melodic themes will be disappointed; but once one starts to appreciate the logic of Webber's approach it becomes possible to see a different kind of beauty in the unfolding of each piece. The "directed" improvisations that are interspersed through the music, as on the three "King of Denmark" pieces inspired by Morton Feldman's graphic compositions, serve as a jolt to the senses, allowing the moments of carefully structured ensemble work to stand out in higher relief, notwithstanding their occasionally disorienting aspects.

In the end, as befits the inspiration of the record, it's the percussive power of the music that gives it its identity and appeal—and it will undoubtedly serve to elevate Webber's standing even further among the top tier of today's creative music composers.