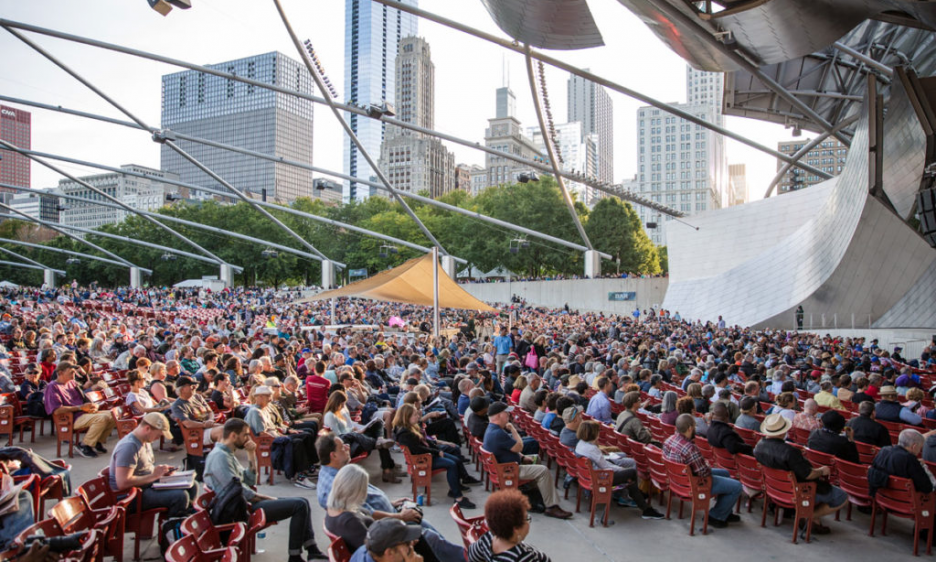 By Patrick Burnette
September 12, 2018
Sign in to view read count

Jazz lovers should be thankful that a serious jazz festival with such a distinctive local flavor like this exists.

A Beginner's Guide to the Chicago Jazz Festival

The Chicago Jazz Festival is a free event scheduled each Labor Day weekend and offering over fifty concerts in various outdoor venues. The 40th edition—running from August 29 to September 3, 2018—is now in the books. If you attended this year—or in recent years past—you already have a pretty good idea whether or not the Chicago Jazz Festival appeals to you. For those still on the fence about sampling it, or for veterans who haven't been able to attend the last few years, here's a breakdown of this year's festival.

Chicago boasts a distinctive jazz culture. Quite apart from its pivotal role in early jazz (Louis Armstrong held court there for several years and the Austin High School gang sprung up in response to his influence), Chicago was also the birthplace of the avant-garde AACM in the sixties and the home of such distinctive mainstream tenor-saxophone stylists as Gene Ammons and Von Freeman. In the later twentieth and early twenty-first centuries, Chicago boasts exponents of the inside/outside avant-garde tradition (Nicole Mitchell, Rob Mazurek, Ken Vandermark), mainstream players (Orbert Davis, Ramsey Lewis), and vocalists (Patricia Barber, Kurt Elling), as well as artists combining two or more of these streams (Fareed Haque, for just one example, who plays straight ahead funk and organ-based jazz as well as bringing in other cultural strains to the mix). The Chicago jazz scene is on full display at the festival, which relies on local artists for much of its afternoon programing and some of the evening headliners. It's a great place to get to know artists you may not have heard about, and if you attend several times in a row, you'll start to notice certain movers and shakers appearing in various groups and working through new material year after year. That said, if you plan to visit only one festival a summer and want the greatest density of "big" or "national" names in one place, this may not be the shindig for you.

Chicago, of course, also provides the venues. For many years, the festival took place on Jackson Street (off the South loop) and in Grant Park. Recently, however, it has migrated North to Millennium Park. During the afternoon, concerts take place in a large tent to the North (the Jazz and Heritage Stage) and (for 2018, at least) an open stage to the South (the Von Freeman Stage, which was previously housed in a tent as well). Acoustics and/or sound engineering in the Jazz and Heritage Stage have been problematic for the last couple of years, and the ceiling fans never move enough air on hot days. The outdoor Von Freeman Stage, in contrast, has excellent amplification, with all instruments clearly audible and the bass, especially, reproduced with care and force (but no "rock" style excess). Other venues are scattered nearby, including a smallish tent set up on a nearby rooftop. Roughly speaking, the more "traditional" acts perform on the Jazz & Heritage Stage, the more challenging artists populate the Von Freeman stage, and amateur and up-and-comers play the roof. None of the locations are particularly pleasant on humid, broiling days such as those experienced this Labor Day weekend. If Labor Day is running warm, be sure to bring a good supply of water, or cash—beer, soda, and water are available from on-site vendors.

The Pritzker Pavilion—a venue with seating near the stage and a grassy area behind for picnickers and conversationalists -hosts the evening headliner performances. The amplification is state of the art and spread across the venue from suspended speakers, giving everyone in the audience a "front row" seat, acoustically speaking. A huge projection screen directly above the stage allows attendees in the seats to have a good look at whichever performer is interesting the camera-operator at the moment. For an outdoor venue, the conditions for actually hearing and enjoying the music could hardly be better. That said, serious rain storms can make Pritzker unusable, as was vividly illustrated at Friday night's performance when a downpour of Biblical dimensions chased Diane Reeves off the stage and the audience out of the park, soaked to the bone.

The Chicago Jazz Festival is programmed by Jazz Institute of Chicago, a non-profit that takes their mission quite seriously. There are surprisingly few cross-over artists featured and no "jazz-adjacent" performers, in contrast to other "jazz" festivals dependent on sponsors and ticket sales for survival. If you are a hard-core, capital "J" jazz fan, you are certain to find much to please you, and may well run into an act or two that truly challenges you. (Sets by Jaimie Branch, Matthew Shipp and Ivo Perelman, and Eric Revis with Ken Vandermark, offered no olive-branches to the uncommitted.) So, it's a festival ideal for the jazz aficionado, but if you're travelling with a jazz-dubious spouse or friend, you may want to stick with the evening concerts... or just consider a more commercially-oriented event.

Chicago is a wonderful city and the downtown and loop area have grown more appealing since the early nineties, though you'll never confuse the South Loop with Xanadu. Any given week of the year has several nighttime concerts on offer at local clubs and watering holes (the Jazz Showcase and Green Mill are two of the best known, but there are many more)—so there's plenty to do after the festival closes at 9pm, if you have the energy left to search it out. Unfortunately, Millennium Park's amenities are not as festive as they might be. Bathrooms are plentiful if not inspiringly clean or conveniently accessible. The food and drink on offer are basic in the extreme (hot dogs, pretzels, and what I unscientifically refer to as "7-11 nachos" are the order of the day), though of course once you've crossed Michigan Avenue the possibilities are endless. If you don't want to miss a single minute of music, you need to pack some food or settle for mediocre grub. The atmosphere is pleasant (Park attractions such as the famous reflective "bean" are sandwiched between the two afternoon venues, so you'll wander past thousands of tourists as you migrate from stage to stage) and this year, at least, there was a light security check at the entrance if you brought a bag or backpack. Will food trucks ever find their way to this culinary desert? One can only dream.

I can't do justice to all the acts I saw, much less the dozens of ones I missed, but here are a few highlights. If you can catch bass clarinetist Jason Stein on disc or live, by all means do so. His quartet set with a tenor/counter-bass clarinetist! as the other horn brought humor and be-bop urgency to a festival that was a bit serious and inward looking in the afternoon sets. The Eric Revis / Ken Vandermark set was the richest of the hard-core "out" sessions, with plenty of color, texture and variety on offer. (Vandermark still breathes fire, but he's a flexible expressive player too and was a joy to experience). Black Diamond (google "Black Diamond Chicago Band" to have any hope of finding them) offered a two-tenor front line far from the blustery duals of yore, and are well worth a listen. Bassist Matt Ulery contributed to many of the afternoon ensembles and mounted a big-band for the first Sunday night set. I'm not sure his large ensemble writing is the best facet of his musicianship but his smaller projects have been fascinating on record. The outstanding national act I was able to catch was Darcy James Argue's Secret Society. The density and detail of his writing and arranging is as ambitious as it is compelling and the man knows how to build an ensemble from the bottom up. Argue's unit is possibly the most important large ensemble in jazz right now and amazing to witness live.

One or two of the afternoon acts were a bit marginal—perhaps an unavoidable situation given the breadth of the programming. Since it's produced by the city, a certain amount of civic pontificating gums up the intervals between the evening sets, though the hosts themselves were charming. Finally, several afternoon performances convinced me that studio recordings versus live festival performances are a bit like the difference between acting for the movies and acting for the stage. Some musicians seemed to be playing studio-styled jazz that works best consumed through headphones, and the results didn't always translate well in an outdoor venue with all of its attendant distractions and the temptations of other music to sample just a few dozen yards away.

Jazz lovers should be thankful that a serious jazz festival with such a distinctive local flavor like this exists. If you have adventuresome ears, time, and money (even a "free" festival isn't after food, travel, and lodging are figured in), it's a wonderful way for the hard-core jazzbo to spend a Labor Day weekend.