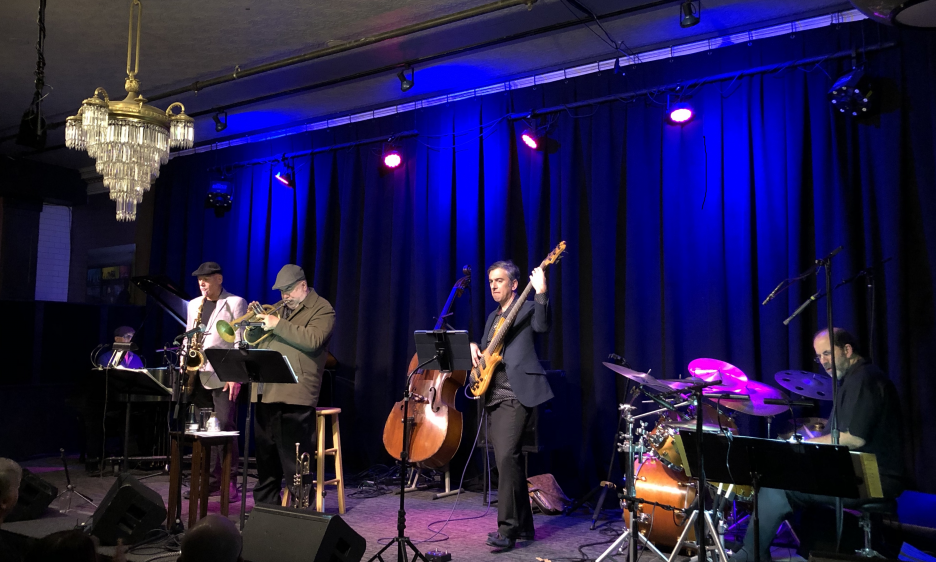 Michael Brecker lives on. On Saturday night, Bay Area band Charged Particles brought their Michael Brecker tribute to Dazzle for a two-night stand. Normally a trio, the Particles were joined by Tod Dickow, a Brecker acolyte, on tenor sax and Michael Brecker's brother and the other half of the Brecker Brothers, Randy Brecker on trumpet.

Michael Brecker (March 29, 1949-January 13, 2007) was one of the most acclaimed jazz musicians of the late 20th and early 21st Centuries. He was a force of nature on the tenor sax. He could lay down gentle lines with the relaxed fluidity of a summer breeze only to roar like a hurricane moments later. He was widely recognized as one of the top post-John Coltrane tenor players on the scene.

While his saxophone playing was peerless, he also compiled a significant body of compositions. He won 15 Grammy awards and also appeared on nearly 900 albums as a session man, side man and leader. With the Brecker Brothers, he and brother Randy had their own eponymous band and played together as session musicians on a wide spectrum of albums.

Obviously, any Michael Brecker tribute would require a special player in the tenor sax slot and, in this case, San Francisco based Tod Dickow is the man. He points to the tenor giants of the 20th Century as significant influences in his playing, saxophonists like John Coltrane, Wayne Shorter, Joe Henderson, Sonny Rollins and Dexter Gordon. But playing Michael Brecker compositions as he primarily did Saturday night, he channeled Brecker most of all.

Band leader and drummer, Jon Krosnick formed the first iteration of Charged Particles in 1993, in Ohio. Eventually relocating to the Bay Area, Krosnick has kept the band going as a trio with current bassist Aaron Germain and keyboardist Murray Low starting in 2011. One of the hallmarks of Charged Particles is that the band doesn't shy away from complex music. The members have been willing to put in the time to practice intricate parts on their own and devote time to rehearsing together.

That kind of work ethic is necessary for not simply performing Brecker's music, but to breathe the vivaciousness into the complicated compositions that they demand. The hard work was clearly evident at Dazzle on Saturday night. The band executed the heady compositions with nuance and impeccable attention to detail. All of the tunes the band played were composed by Michael Brecker with the exception of "El Niño" which was composed by long-time Brecker keyboard associate Joey Calderazzo.

Charged Particles has been playing its Michael Brecker tribute with Dickow since at least 2015. It is only very occasionally that brother Randy Brecker joins the band and Saturday night was one of those nights. Not surprisingly, Randy's career trajectory followed Michael's to a large degree, not the smallest reason being their association as the Brecker Brothers.

Randy Brecker is on record as saying that in first listening to Charged Particles with Dickow on tenor he had to pinch himself to remember that his brother was no longer with us. Saturday night, he fit right in doubling with Dickow (and sometimes joined by Greg Sankovich on piano) on many of the twisty, turny themes of his brother's compositions. And, of course, the band made plenty of space for trumpet solos throughout the evening. Between paying homage to his brother and having Dickow at his side, Randy Brecker channeled a similar elegant intensity that his brother was known and revered for.

Band leader, Krosnick was an affable emcee throughout the evening, discussing his respect of Michael Brecker and describing many of the tunes they played. Behind the drums, he propelled the proceedings with active fills and commanding force through all the quirky rhythm changes. Germain on bass stayed behind his upright bass for most of the set but picked up a six string fretted electric bass for the last third of the set. That's where he was especially able to display his considerable chops. Usual keyboard man Murray Low didn't make it to Denver but one of several reserve Particles subbed, the capable Sankovich. Although he was locked on Dazzle's grand piano all evening, it looked like he was able to get in a pretty good aerobic workout with his swaying back and forth and up and down. Clearly, he's a musician who feels the music.

Charged Particles recorded their Brecker tribute with Dickow in 2019 and released it on a CD, Live at the Baked Potato! (Summit, 2021). Saturday night, the band played many of the tunes that appear on the CD as well as several others including more from Brecker's last album Pilgrimage (Heads Up, 2007). "Tumbleweed" from that album was a particular highlight. "Anagram" and "The Mean Time" were also drawn from that album. Krosnick introduced another song from that album, explaining that Brecker wrote it after he became ill with myelodysplastic syndrome (MDS), the poignant "When Can I Kiss You Again?"

After Brecker became ill, a worldwide search was launched to find a potential matching stem cell donor, but the effort ultimately failed. His widow, Susan Brecker has established the Michael Brecker Family Foundation to support research to cure MDS and other cancers. A portion of the sales of Live at the Baked Potato! CD goes to support the fund.

Michael Brecker, gone too soon, but his impact continues and will continue to reverberate, especially with devoted musicians like these.

The Mean Time, Tumbleweed, El Niño by Joey Calderazzo, When Can I Kiss You Again?, Anagram, Arc of a Pendulum, African Skies, Peep.