By Dan McClenaghan
November 26, 2022
Sign in to view read count 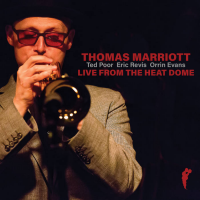 Trumpeter Thomas Marriott settled into his groove on the Seattle-based Origin Records. He released more than a dozen discs under his own name there, including the gorgeous Romance Language (2020), a striking ballad set, and Trumpet Ship (2018), a high-energy bop workout. And then there was Crazy: The Music of Willie Nelson (Origin Records, 2008), described as having "a distinctly modern and often brash tone." And "Favoring some serious musical adventurousness."

With Live From The Heat Dome that modernity, brashness and a sense of adventure are back, as the artist makes a 2022 switch to Inami Records. Part of this comes from the choice of sidemen: Pianist Orrin Evans, who played on Trumpet Ship, bassist Eric Revis and drummer Ted Poor are all free-minded musicians with modern leanings. The sound has a more elastic feeling than that of the two previously-mentioned albums. It sounds more live, because it is, due to unforeseen circumstances—a pile of hot air holding steady over Seattle, making things oppressive at the time of the session via a heat dome that caused a last-minute (the day of the planned recording) studio switch, where there were no isolation booths, no headphones, no overdubs. So this is live, minus the audience factor. br />
The quartet—with a couple of guest shots—presents what is as crazy (in a good way) as that near avant-garde Willie Nelson album, as the group feels their way into the opener, "Angel Of Sunlight," written by an Alice Coltrane/Carlos Santana teaming for the album Illuminations (Columbia, 1974). This pared-down version of the tune searches far and wide in an eleven- minute ramble that gives both Marriott and Evans room to roam inside of the unsettled weather system created by drummer Poor and bassist Revis, who try, it seems, to break that oppressive heat dome apart, not with fire and brimstone, but rather with insistence and an implacable "we mean business" spirit.

All other tunes come from Marriott's pen. "The Front Row Family" lightens the mood, with the straight-ahead mindset and the leader's bright trumpet sound. "The Joint Chiefs" begins as a clandestine prowler and shifts into a sort of American bossa nova groove, with some spirited vocalese by guest Johnaye Kendrick, followed by a saucy Marriott solo.

The set closes with "Anything Helps," with Skerik sitting in on tenor sax, providing an extra helping of harmony with Marriott, and a smoldering solo, while Evans sprinkles handfuls of starlight all around, on a resolute tune that marches forward and seems to say: "We don't take no mess here."