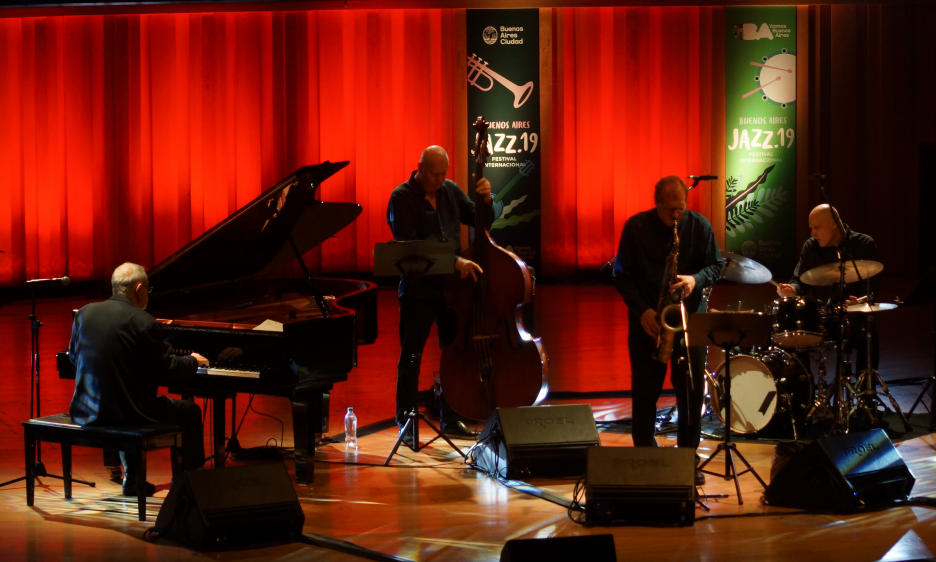 By MARK HOLSTON
January 6, 2020
Sign in to view read count

As the days flew by this past October, it was still impossible to pin down specifics for the upcoming annual Buenos Aires International Jazz Festival. The dates of the event, which has historically taken place in mid-November, remained elusive. The talent line-up was a mystery. Billboards promoting the festival, usually on prominent display in subway stations and on the streets of this metropolis, were absent. Argentina was experiencing one of its periodic political and economic crises, and this one was more problematic than most. The country's monetary unit, the peso, had lost 50 percent of its value, inflation was on the rise, as was unemployment, and the election of a new president would return the leftwing Peronists to power. Difficult times, indeed, to fund and produce a music festival that historically has involved major international talent and countless dozens of local musicians. I was told by a festival insider that if the value of the peso had fallen much more, the event would have been canceled.

Fortunately, despite the stiff headwinds, the 17th edition of the festival was staged over five days in mid-November, albeit with fewer "name" artists than in many preceding years but still managing to present musicians from 15 nations, including Japan, Holland, Colombia, and Austria. Among the limited number of headliners this year were Italian trumpeter Enrico Rava, Cuba-born Canadian pianist Hilario Durán, Canadian woodwind artist Jane Bunnett and her all-female Cuban band Maqueque, and the quartet of veteran pianist Harold Danko and tenor saxophonist Rich Perry. It may have been one of the first times that any of the group's members had been propelled into a spotlight role as a festival's closing concert. But there they were in the event's primo locale, the architecturally stunning auditorium at the Usina del Arte cultural center in the storied La Boca neighborhood performing for a full house of Argentine jazz fans.

While perhaps lacking in the kind of "star power" festival headliners usually possess, the Danko-Perry Quartet, with bassist Jay Anderson and drummer Jeff Hirshfield, was nonetheless enthusiastically received. Usually presented in club settings, the unit invited the audience into the intimate, inner sanctum of a classic piano-led quartet, and the erudite Porteños (residents of Buenos Aires) responded to the group's unforced blending of post-bop and "free" influences.

"The title of this next composition is 'Waiting Around,'" mused pianist Danko as he introduced another of his original compositions. The 72-year old musician added wistfully that over the course of a career that has spanned five decades and has included performing with the likes of Chet Baker, Lee Konitz and Gerry Mulligan, he has spent a lot of time on hold, just waiting for the next opportunity to perform. Fittingly, when the time came to command center stage at a major international festival, Danko and his group were more than ready.

Bunnett and Durán were also part of the festival's closing evening. They were presented informally in the Usina del Arte's chamber music space, with Bunnett blowing both soprano sax and flute and the Cuban at a grand piano. The natural give and take between the two longtime associates was magical, and their exploration of Cuban folkloric-derived styles was an eye-opener for many in the audience, as Caribbean-rooted Latin music is a style not widely heard or appreciated in Argentina.

While the Buenos Aires festival features a wide range of formal concerts, workshops, and clinics, a feature dubbed "Crossings" is of particular interest. The concept is to pair visiting musicians with hand-picked locals to perform a set or two in a number of the city's jazz clubs.

I sampled a representative "Crossings" performance at the San Telmo neighborhood jazz hot spot, the Bebop Club—widely considered to be the best of the local jazz venues. On this night, local tenor titan Gustavo Musso and visiting Spanish trombonist Santiago Cañada fronted a quintet that included the standout Argentine guitarist Tomás Fraga, drummer Bruno Varela and Cuban bassist Tailin Marrero, a member of Maqueque. Behind Musso's searing lines, Cañada's full-bodied trombonist work and Fraga's svelte guitar outings, it was mostly smooth sailing. An ingenious arrangement of Herbie Hancock's "Cantaloupe Island" was representative of what the ad hoc group was able to convincingly pull off.

After the set and over a round of beer, I chatted with Musso about his influences. I ventured that I felt the vibe of the late tenor saxophonist Bob Berg in his work. Musso looked stunned and then replied that, in fact, Berg had been one of his earliest and most profound influences, and just that night he had decided to switch mouthpieces in an effort to properly emulate Berg's stylistic identity.

Free concerts that draw a cross-section of the city's population, including families with toddlers in tow, are staged at the Parque Centenario amphitheater. The expansive park is set in the heart of the middle-class Caballito district. It includes a small lake, planetarium, natural science museum, diversions for kids, and plenty of green space for picnickers. The park is surrounded by an extensive flea market that offers everything from vintage books and LPs to baubles and antiquities. Created just over a decade ago, the amphitheater sports seating for 2,000 and is notable for its excellent sound engineering.

One of the programming features at these outdoor concerts is "Jazzología," hosted by well-known music journalist and radio host Carlos Inzillo. Typically, these 45-minute sets present groups whose styles represent a wide range of traditional jazz idioms. The soft-spoken, genial Inzillo opens each set with a brief explanation of the history of the style that's to be performed. The offerings this year were particularly diverse.

The 22-member Django Argentina Chamber Orchestra, loaded with acoustic guitars and violins, demonstrated the country's fascination with gypsy jazz and the legacy of composer and guitarist Django Reinhardt. A palpable sense of joy among the assembled musicians was evident as the ensemble performed the late composer's well -known repertoire.

Another look back at jazz heroes of the past was "Unforgettable," a tribute to the Nat King Cole Trio, with loquacious pianist and singer Manuel Fraga leading the group through a survey of Nat's greatest hits. It was a family affair as Fraga's guitarist son Tomás, better know for a more modern style of improvising and comping, was featured, as well as the leader's vocalist daughter Cecilia.

The featured attraction of a trio—piano, bass, and drums—fronted by drummer Néstor Astarita was the 81-year old drummer himself. A certified legendary figure of Argentine jazz, his decades-long career has included performing with many iconic musicians, among them Leandro "Gato" Barbieri and Carlos Franzetti. Moving from behind the drum set, the still spry musician showed his ballroom tango steps, dancing with a professional female tango dancer to the audience's delight.

A frequent visitor to Buenos Aires, New Jersey-based Japanese pianist Tomoko Ohno was paired with Argentine jazz guitarist Ricardo Lew for a set of standards in a Jazzología segment. Lew possesses a rich vocabulary of jazz guitar styles which he deftly employed in his lean solos. Ohno is a ball of well-directed energy. She displayed her ferocious, two-fisted approach to the keyboard, masterfully blending her technically brilliant skills with an honest respect for melody interpretation on Astor Piazzolla's "Libertango" and a tidy program of tuneful standards like "In Your Own Sweet Way" by Dave Brubeck.

Also featured on the Parque Centenario stage were impressive examples of the sophistication of native Argentine jazz musicians. Rocío Jiménez López, a young pianist and composer from Rosario, Argentina's third-largest city, presented her quartet, including trombonist Milton Méndez, in a set of the leader's inquisitive, chamber jazz-meets-free-jazz works. Woodwind artist Ara Tokatlian and electric bassist Guillermo Bordarampé, members of the fondly recalled 1970-era rock group Arco Iris, led a quartet on a truly impressive program that successfully married rhythms and flute sonorities associated with Argentina's indigenous people of the Andean region with rock, fusion jazz, and other contemporary influences. Tokatlian's playing captured the essence of a wide range of artists, from "Gato" Barbieri to Carlos Nakai and Yousef Lateef as the set projected a winning combination of rhythmic intensity and a spiritual vibe.

From Madrid, Spain, trombonist Santiago Cañada presented selections from his debut album Tromboniselando, a recorded-in-Spain project that features the late Jerry Gonzalez on percussion on two tracks. Cañada pulled off a haunting set of flamenco-influenced works and in the process provided a showcase for the talents of a quintet of Argentine musicians who easily adapted to the demanding flamenco style. Singer Antonio Manzano was particularly impressive in his interpretation of the shrill, emotive gypsy-esq vocal style. The leader's trombone was also commanding, whether engaging in call-and-response forays with the vocalist or tapping more burnished tonalities on instrumental works.

The political and fiscal upheaval in the country, in the end, did little to dampen the enthusiasm of thousands of local fans to seek out festival performances at 27 venues spread around this vast metropolitan area. And, the good news: Planning for the 2020 edition of the festival is already underway.