Pianist/composer Harold Danko is best known for his long-term associations with an impressive list of jazz legends including Chet Baker, Gerry Mulligan, Thad Jones/Mel Lewis, Lee Konitz and Woody Herman. Beginning his piano studies at the age of five, Harold became serious about pursuing a career in jazz at the age of fifteen when he commenced studies with Gene Rush in Youngstown, Ohio. After graduation from Youngstown State University and a stint in the Army band, Harold landed the piano chair in Woody Herman's Thundering Herd, which launched his career as a much sought after jazz musician. He also developed a reputation as a respected jazz educator and served on the faculties of the Manhattan School of Music, the New School/Mannes, and Hartt College.

He has performed at major jazz venues throughout the world as well as on recordings, television and video. As a band leader he has been featured in Lincoln Center's "Meet the Artist" series, Washington (DC) Performing Arts Society series at J.F.K. Center, the Rochester International Jazz Festival, and numerous jazz festivals both in the USA and abroad. In 1995 he was awarded an NEA Fellowship to perform his own works in a series of concerts in New York City. Throughout the 90s Harold performed with and composed for his own quartet with Rich Perry (tenor saxophone), Scott Colley (bass) and Jeff Hirshfield (drums) and more recently a trio with Hirshfield and Michael Formanek (bass) with whom he has recorded a series of highly acclaimed CDs on the SteepleChase label. For more than two decades, Harold has won ASCAP awards, based on "the unique prestige value of [his] catalogue of original compositions."

He accepted an appointment from the Eastman School of Music in 1998 and now chairs the Jazz and Contemporary Media department. He teaches jazz piano, directs the Jazz Performance Workshops, and heads the Eastman Jazz Trio, whose first CD was released in 2003. In addition to his own educational video, Jazz Keyboard Techniques, available only in Brazil, he can be seen and heard on video performances with Gerry Mulligan, Chet Baker, and Lee Konitz. Harold's featured column, "Solo Piano", appeared in Keyboard Magazine for more than five years, and his keyboard improvisation method, the Illustrated Keyboard Series, is a widely used reference. 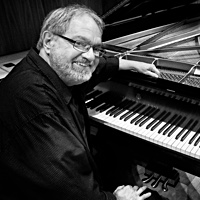 All About Jazz musician pages are maintained by musicians, publicists and trusted members like you. Interested? Tell us why you would like to improve the Harold Danko musician page.