Advertise
438
Music and the Creative Spirit 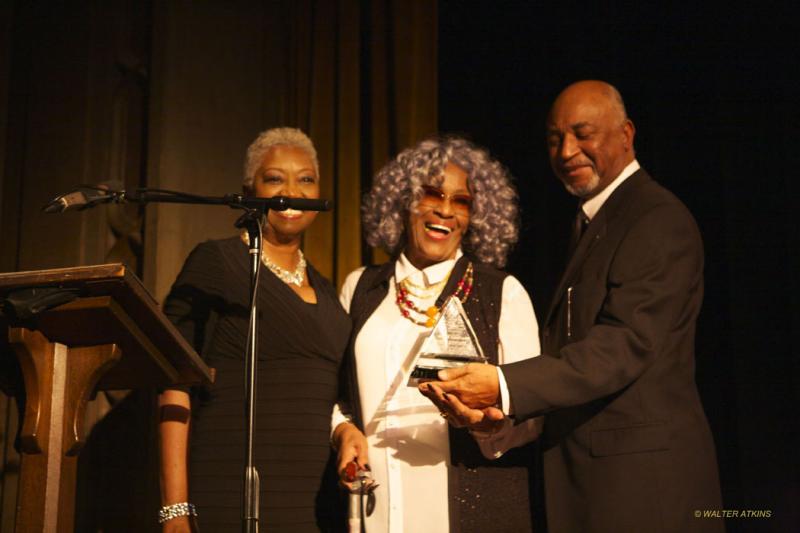 By Walter Atkins
October 10, 2016
Sign in to view read count

The 2016 BMJLA Awards ceremony was a Montgomery Family affair that honored the spirit of Charles "Buddy" Montgomery while it commemorated and supported long established artists with rising young jazz talent in the San Francisco Bay Area.
—Walter Atkins

Respected KCSM FM personality and Master of Ceremonies Clifford Brown Jr. said, "The BMJLP was created to regenerate Buddy's plans to promote jazz music and to acknowledge those whose creative expression represent this unique style of music. Additionally, to help inspire young music students to continue developing their talent and individual creativity."

According to Brown, the late vibraphonist/composer/ producer was, "in addition to being one of the great pioneers of the jazz genre in his own right, Buddy was also the youngest sibling in an incredibly talented family. He was the youngest brother of the late great jazz guitarist Wes Montgomery and the exceptionally talented bassist, (William) Monk Montgomery, otherwise known as the "Montgomery Brothers." They played and recorded together and Brown considered them among "first families of jazz royalty" along with the Marsalis and Escovedo families.

The inaugural BMJLP Awards were held on a pleasant Northern California night at the historical Hillside Club in Berkeley, CA. Hillside was founded in 1898 by a group of women concerned with insuring the local built environment respected and enhanced the existing natural one. To that end, famed architect, early environmentalist, and club member Bernard Maybeck designed the original 1906 club house. Today, the Hillside Club is focused on environmental sustainability and serves as a cultural and civic venue. It is, "Berkeley's oldest community club," with open membership according to club literature.

"Buddy was about music, education and helping people. He loved, respected and was passionate about it. He would be glad to see Marlena Shaw here." Brown then introduced Jeff Chambers and the Power Trio members: bassist Chambers, pianist Glenn Pearson, drummer Tim Anqulo and special guest, multiple Grammy nominee John Santos on percussion. Their set included Dizzy Gillespie's 1942 signature song "Night in Tunisia." Mykah Montgomery, Buddy 's granddaughter, joined the band and sang the Webber/Nun standard "Memory," along with a ringing "The Thrill is Gone" from her upcoming CD. The accomplished songwriter, film producer, and author also produced the BMJLP Awards.

Brown introduced the award presenters; BMJLA executive producer Charla Montgomery along with California Jazz Conservatory development associate Mary D'Orazi. Montgomery presented a scholarship award and plaque to Shavon Moore while D'Orazi read her bio. Another recipient, Sheldon Alexander was a young drummer raising money to attend a five-week music program at the Berklee College of Music in Boston MA. When the youngster initially announced this plan to his parents, they thought he meant nearby UC Berkeley. The full house laughed with this comment. Alexander received the "Most Promising Jazz Artist" award. Santos received the "Most Influential Artist" award because of his comprehensive forty year career and "consistent efforts as a community leader for the performing arts and for promoting the styles and extraordinary rhythms of Latin jazz music."

Chambers was also acknowledged and received a BMJLA award. Brown said, "He is a talented and versatile bassist known for his impeccable timing, dynamic rhythms and improvisational dexterity. Jeff masterfully breaks the conventional accepted boundaries of his instrument and forges new melodic possibilities." Chambers who was genuinely surprised and pleased added, "Buddy saw something in me and took me under his wing. This award means a lot to me."

Brown continued, "Marlena Shaw is a beautiful and sultry jazz songstress and is this year's Buddy Montgomery Jazz Legacy Award recipient. It also happens to be her farewell performance!" Over the years, both DownBeat and Record World have named her "Best Female Singer and many have compared her range, class and swing to that of eternal jazz divas Sarah Vaughan, Dinah Washington and Nancy Wilson"

The MC added, "it's easier and more descriptive to think of her as a natural element: like water. Her music is fluent and refreshing. Whether she's singing jazz, R&B, pop, rock, soul, blues or gospel, her originality make such distinctions irrelevant, and each song becomes intimate and new.

David and Sylvia Montgomery personally presented the BMJLA award to Shaw. Montgomery said, "We are proud to be here tonight and we know if Buddy were here, he would be so very proud also. It is the Montgomery Family's great pleasure and honor to present the Buddy Montgomery Jazz Legacy Award to Miss Marlene Shaw."

The night's sponsors included Ernest Clark, the Post News Group, and the East Bay Express. During the short intermission, Shaw mentioned she considered, "Oakland—Berkeley her home when she started out professionally." This would be one of her final public performances.

After the break, Shaw came out and took the stage. During her spicy set, she talked about how one of the Montgomery brothers didn't like singers but he liked her. Shaw was performing in Japan when contacted by the family for one last appearance. The opportunity to honor Montgomery who passed in 2009 motivated her return for tonight's special event. After making herself comfortable on the stage, the admired singer commented the music stand with her set list had been moved. Ever the artist, she stated, "We don't have to stand on ceremony. Just tell me what the next song is."

The host mentioned Shaw was the "greatest storyteller" and she did not disappoint. She shared a Vegas story with the capacity crowd. While performing in Sin City, she took a cab to see jazz saxophonist Cannonball Adderley because she was interested in recording "Mercy, Mercy, Mercy" (written by Adderley's pianist Joe Zawinul). He responded suggestively, "We can work something out." She quickly added she wasn't interested in the then heavy set musician. She only wanted to record the song with lyrics by Gail Fisher of Mannix television fame. Shaw jokingly commented she thought Fisher's TV character could only ask if Joe (Mannix) wanted coffee. She was "glad to see someone who looked like us" in those days. Her compelling set included Bernard Ighner's moving "Everything Must Change" and the optimistic "What A Wonderful World" popularized by Louis Armstrong. She added, " I hope you enjoy it."

Shaw said, "This is the part I'm going to miss." She enjoyed people and live performances. She mentioned making mistakes, referring to her husband but acknowledged, "I had lovely children and thank God they don't look like him." A fan asked how she could sing her 1977 signature song "Go Away Little Boy" after so many years with such passion. "He's still living" she replied.

Nearing the program's conclusion, other members of the Montgomery Family were introduced and they thanked host Brown for his support. It was Buddy's wish to produce the awards ceremony and the family decided to do it with Marlena Shaw.

Several attendees stayed afterwards to share their experiences and stories while enjoying the moment. One elegantly dressed patron described the BMJLP Awards presentation as "fabulous" and "phenomenal."