BY DAN BILAWSKY
October 9, 2016
Sign in to view read count 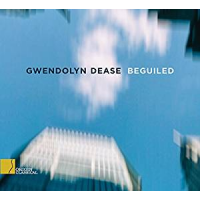 While this fourth album from marimbist Gwendolyn Dease is rightly seeing release on the classical arm of Origin Records, it wouldn't have been completely out of place if it had landed on the jazz side of that imprint. Dease bypasses contemporary marimba fare and late twentieth century favorites from the usual suspects like Ney Rosauro, Casey Cangelosi, Joseph Schwanter, Keiko Abe, and Jacob Druckman, focusing instead on newly commissioned works from jazz-associated composer-performers. A number of jazz notables—trombonists Marshall Gilkes and Michael Dease, bassists Linda May Han Oh and Rodney Whitaker—also drop by to join in, upping the album's jazz cred even further. The resultant work still sits firmly on the recital hall stage, not in the basement club, but there's no arguing the jazz influence in the music.

Beguiled begins with a trip through vibraphonist Behn Gillece's "Beija-flor," a piece originally written for the composer's instrument but adapted for marimba. It's the only true solo work on the album—a nine minute Brazilian-influenced beauty that resonates with nature. Its name—Portuguese for "hummingbird"—speaks to the song's style and sonic signatures. Glenn Zaleski's "Duet -Morning" brings Gilkes into play, initially framing his round tone and somber statements over Dease's flowing lines. The music intensifies when a 5/8 feel ensues after a solo marimba statement. The song's companion piece—"Duet -Evening," appearing further down the playlist—is the other side of the same coin. There, trombonist-producer-husband Michael Dease takes on trombone duties and brings his mute mastery to the fore.

Kyle Athayde's "G.W.G.E." and Eric Miller's "The Beacon Shines Bright" sit between Zaleksi's contributions, showing off different sides of Gwendolyn Dease in different settings. The latter, taking inspiration from the guiding power of lighthouses, brings trombonist Weston Sprott into the picture. It's both stately and surprising in the way it develops. The former finds Dease working with Oh, perhaps the most sonically and stylistically sympathetic partner on the program. The title abbreviation of that piece references pianist Monty Alexander's response to a question about whether or not he plays any electronic keyboards—"I only play the good wood from the good earth," he replied—and it's more than fitting given the nature of the instruments at hand. Oh delivers a compelling introduction, turns the bass into a hand drum, and creates a grooving atmosphere with Dease. Each nimbly and coolly dances around the other and they lock in for some tight unison lines. The chemistry between the two is palpable.

The final tracks on the album are both trio-centric, with Whitaker joining the Deases. The first—the title track, from the pen of the great Rufus Reid—opens with somewhat staid and searching intentions before settling in. The piece moves across six sections, but Reid doesn't write in movements, insert hard freezes, or draw dark lines of demarcation. One idea moves into the next over the course of fifteen minutes, allowing for numerous changes in focus and landscape with no halt in progress. It's a work that, more than any other here, fits the post-modern "classical" aesthetic. It also stands in sharp relief against the brief album closer that follows it—Michael Dease's down-home "Porkchop's Blues." The trio is in and out in less than three minutes on that fun farewell.

In commercial and categorical terms this album may sit in a strange limbo, being too formal for the jazz set and too outside-of-the-element for the classicists. But who commissions and creates fine art with commerce solely in mind? No true artist, that's for sure. Forget about what to call this. Just listen to the music and let it guide you to wherever it may lead. Gwendolyn Dease has done a great service in expanding the idea of what marimba repertoire can include. Bravo to her, the musicians she collaborates with, and the composers who penned these works.