Branford Marsalis and Jean-Willy Kunz at the Kimmel Center 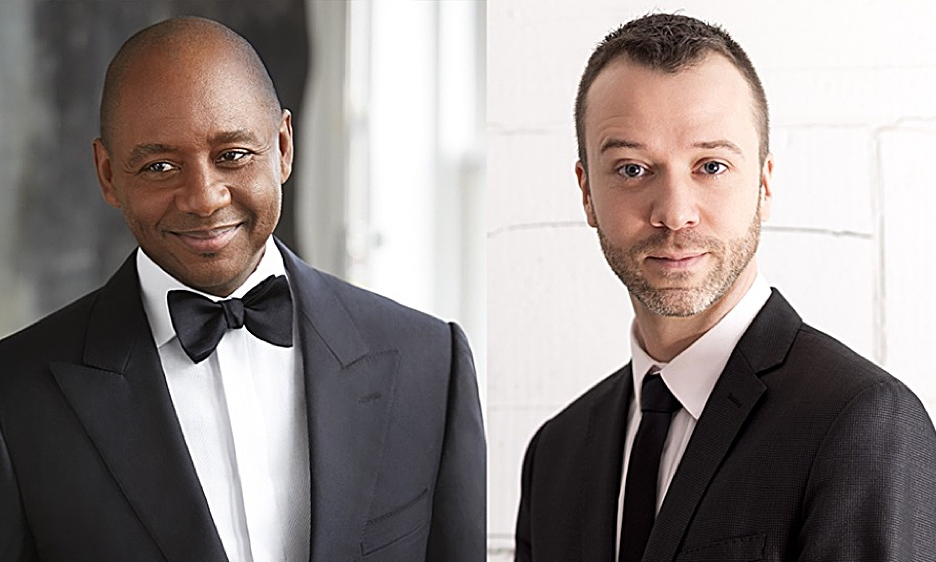 This concert of mostly classical works for saxophone and large scale pipe organ turned out to be somewhat of a surprise to the audience of jazz fans, who packed in to hear their hero, Branford Marsalis. The concert emcee, Michael Barone (a radio producer who also hosts a program called "PipeDreams"), asked for a show of hands of those who were "organ buffs." Less than a dozen in an audience of about 1,000 raised their hands. Nevertheless, for reasons to be described, the jazz fans warmed up to the music quickly.

Many jazz musicians are classically trained and often harbor a desire to perform classical pieces in concert. A singular example was Benny Goodman, who performed Mozart's Clarinet Concerto at Carnegie Hall and elsewhere. Branford's brother Wynton Marsalis made a best seller album of trumpet concertos (Haydn-Hummel-L. Mozart, Sony Classical, 1992) and composed a violin concerto. But the current concert was well-conceived to provide something more than a jazz icon showing his classical side. First of all, Jean-Willy Kunz (resident organist of the Symphonique de Montreal) played the magnificent Cooper Memorial Organ in a way that would thrill even the tone deaf. He began with an extended solo fanfare, Maxime Goulet's "Citius, altius, fortius!" This reviewer has heard nothing like that theatrical, rousing organ sound since his mom took him to Radio City Music Hall as a kid.

For the next piece, Branford Marsalis came on stage and, in a very relaxed manner, picked up his soprano saxophone for Louis Vierne's "Les Angelus, op. 57." Vierne was the organist at Notre Dame Cathedral in Paris, and his romantic style of composing was influenced by impressionist composers like Debussy and Ravel. Since the Great American Songbook grew out of romanticism and impressionism, jazz fans were well-prepared to enjoy such music. The pleasure was enhanced by Branford's superb tone and virtuosity and the duo's fine execution of this and the other compositions, all of which were based on harmonic progressions familiar to jazz listeners. Marsalis and Kunz were seriously thinking of their audience when they planned this concert. For instance, a Latin influence was manifest in the next piece, Pedro Iturrolde's "Pequeno Czorda."

Following the intermission, the music took on a stronger jazz-related impact. The most aesthetically beautiful moments of the concert occurred with an excerpt from Astor Piazzola's "Histoire du Tango," familiar to many jazz aficianados. Then Kunz did a lovely solo improvisation based on "My Funny Valentine," capturing the subtle emotions of that jazz standard. The next composer on the roster, Darius Milhaud was Dave Brubeck's composition teacher to whom Brubeck remained forever indebted. "Scaramouche, op. 165: Vif, Modere, Braziliera" poses virtuosic challenges to both saxophone and organ which were deftly met by both performers, and the last, impossibly difficult movement clearly shows the influence of jazz rhythms on Milhaud. So it provided a perfect vehicle for a Marsalis workout.

Next, Marsalis, who was very comfortable with the audience, spontaneously spun "Fly Eagles Fly," much to the joy of the still-glowing Superbowl winner's fans. He followed it with a solo of his original: "Blues for One," a walking blues in which he marched around the stage, perhaps a symbolic gesture to the New Orleans marching bands of his home city. By this time the audience was elated and gave Marsalis and Kunz a standing ovation, calling the duo back for an encore. Their version of "All the Things You Are" included the Dizzy Gillespie flip and had all the finest jazz swing and improvising anyone could ask for. It might even have had Cole Porter smiling from above.

Crossover and multi-genre music is a global phenomenon today. What singled out this concert from the crowd were the extraordinary virtuosity and rapport of Marasalis and Kunz on two infrequently paired instruments (if you forget the Hammond B-3 organ) and their excellent choice of classical pieces that could be readily appreciated by jazz fans.

At the concert, this reviewer found himself by sheer chance seated next to drummer Justin Faulkner and his family: mother Carol, and siblings Suzanne and Nazir. Justin is a Philadelphian, currently the amazing drummer for the Branford Marsalis Quartet, and young enough that he has no place to go but up. I had a great conversation with Justin and his mother, reminiscing with the latter about the late, great Trudy Pitts' incredible performance at the Kimmel Center organ as the opening act for her long-time friend singer Nancy Wilson. Justin asked me to spread the word about one of his projects, the community jazz festival at Clarke Park in West Philadelphia. This encounter with the Faulkner family reminded me of the presence of the wonderful local and global jazz communities and families to which we all belong. When we go to a jazz show, we have family and friends sitting all around us. It's a community where the only requirement for membership is a love of jazz.