By Mark Sullivan
February 19, 2018
Sign in to view read count 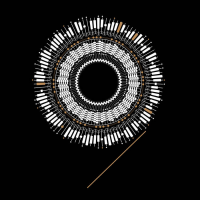 After Cómo Desaparecer Completamente (Self Produced, 2016), a collection of Radiohead covers, Argentinian pianist/composer Marco Sanguinetti returns to a program of his compositions. The instrumentation is similar to its predecessor 8 (Acqua Records, 2014): an unusual combination of piano, turntable, cello, double bass, drums, and occasional guitar. So while it is primarily an acoustic ensemble, the scratching lends a prominent electronic color (DJ Migma is definitely a full member of the band, actively contributing on all of the tracks).

It's hard to decide how to classify this music. There is a minimalist aesthetic, with an emphasis on repetitive rhythmic figures. While there is an improvisational feel, there is little traditional jazz language, and the focus is primarily on an ensemble sound rather than soloists. "Tremendo" opens with club audience noises, then Sanguinetti's piano introduces the ostinato that drives the piece; cellist Violeta Garcia mainly follows the pianist's left hand in an accompaniment role (as she does on many of the tracks). "Niño" is all rubato texture from the cello, drums and scratching, until a lyrical piano part emerges. "Subte" features a scratched spoken word—in English, apparently a political speech—with the ostinato pattern in the bass.

"Murga triste" is a lyrical, piano-driven piece; but the bridge introduces a prominent scratched accompaniment part, and very active drums from Fermin Merlo (who returns from 8). Merlo seems to have more latitude than the other band members, but he has only one brief drum solo, on "Isodravio" (which also features guitarist Pablo Butelman playing an overdriven accompaniment part, a new texture in the program). "Escena final" features Sanguinetti's stately harmonium, which is joined by the bass and arpeggiated accompaniment from Butelman (who also appeared on the Radiohead album). The sound shifts towards the end when Sanguinetti switches back to piano, along with a prominent cello part. Cellist García finally gets to play the lead voice on the closer "Brebaje."

Marco Sanguinetti has crafted an individual sound, with one foot in the populist jazz piano camp (e.g. Esbjorn Svensson's e.s.t., GoGo Penguin) and the other in minimalist New Music (e.g. Nik Bärtsch, Steve Reich). It's an interesting place to be.