BY TROY DOSTERT
February 18, 2018
Sign in to view read count 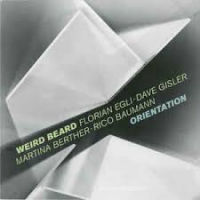 On a recording that exemplifies the "less is more" approach to music-making, Orientation finds Florian Egli's Weird Beard quartet crafting dreamy soundscapes that derive their appeal from the interstices between the notes. With disarmingly simple tunes that seem at times to float on a delicate ether, alto saxophonist/clarinetist Egli, guitarist Dave Gisler, bassist Martina Berther and drummer Rico Baumann prove remarkably skilled in drawing the listener into their evocative musical world.

This is the group's second release on Intakt, following 2016's Everything Moves. The earlier record brought a more overt rock-based sound, with Gisler's fuzzed-out guitar featured prominently. Orientation moves the music in a more muted direction, with a subdued synergy that feels somehow more organic and less forced. Egli's rich alto sax opens the record on "Hanako" by articulating the sparse melody, in perfect tandem with Gisler's similarly spartan guitar accompaniment: gentle chords and a few ringing reverb-inflected notes, over a steady rhythm from Baumann and Berther. "Empty Shell" is even more riveting, with a tune that unfolds obliquely, led by Gisler's abstract musings and a minimalist rhythm from Baumann; when Egli enters on clarinet the effect is enthralling.

Tunes like "Orientation," with its shuffling beat and walking bass line, or "The Big Wasy," with its gently persistent bass ostinato, do a bit more to enliven the music. But even here, the open fluidity of Gisler's playing meshes with Egli's calm, steady delivery to keep things well under control. Then there is the eerie temperament of "Winter," where well-deployed electronics help to establish an unsettled mood, one in which Egli's clarinet takes on a distant, otherworldly aspect. And "No More Rain" is the group at its finest, with another unadorned melody offered by Egli's alto over the subtle, surging rhythms of the band, with just enough energy to take things almost to the boiling point...but stopping just short of it. With music that depends so heavily on atmosphere and ambience, the fine engineering on display here is also pivotal to the success of the album; every nuance is captured wonderfully.

A compelling and at times even mesmerizing listen, Orientation is a fine achievement from a band that continues to become ever more cohesive and distinctive in its approach. One can get lost in this music, and that's always a good thing.