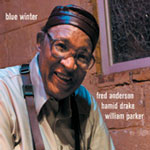 Listening to Fred Anderson can sometimes be akin to listening to a sage or prophet. Wordless history and wisdom simply pour from the bell of his horn, allowing him to communicate with listeners on a different level than most other musicians. Recorded on December 12, 2004, this two-CD, nearly 150-minute complete performance with William Parker and Hamid Drake speaks on many levels.

Since Anderson's decision to return to music full time in the nineties (and still run the Velvet Lounge at the same time), he has experienced a resurgence in popularity not unlike fellow Chicagoan Von Freeman. A co-founder of Chicago's AACM (Association for Advancement of Creative Musicians), Anderson plays with a tone and mindset steeped in tradition, yet he pushes himself to find new ways to communicate and speak through his horn. Bassist William Parker and percussionist Hamid Drake may be more familiar, given their recently raised profiles in the public eye and the constant flow of albums on which they participate. Nonetheless, here they form one of the tightest and most intuitively limber backbones found in music today.

The impeccably recorded Blue Winter consists of four improvisations that are far from the completely out, screeching free jazz some may associate with a program of extended improvisations. Anderson and company never leave the organic-sounding nature of their thematically developed and consistently evolving music by simply going for pyrotechnics. The hallmark here is invention and evolution of melodic ideas, which is in line with something Anderson has said in the past: music is about communicating a story.

If that was the intent for Blue Winter, these men succeed. To give a breakdown of this music is somewhat futile because so much occurs that highlights should be heard and not laid in text. Nonetheless, for a sense of how these musicians can create improvised music that is cohesive and firmly entrenched with the tools of the tradition, listen to "II. Anderson opens the song with a six-minute solo before he is joined by Parker and Drake, who create a swinging groove, propelling the nearly 38-minute track forward. Parker carries the rhythm in his solo spot, only to be swallowed up by Drake riding his cymbals and bringing the music to a groove-based composition that increases in speed and eventually cruises for Anderson to continue his angularly fluid lines. All three musicians follow their own paths; no one is simply fulfilling a role, and when they interlock around the twenty-minute mark, one has to wonder how they communicate with such a singular mindset.

From the opening moments of "I to the fascinating "III, replete with hand percussion and Parker on nagaswaram (somewhat similar to an oboe) in a call and response with Anderson, through the applause that closes "IV, the three are working holistically: listening and responding to each other, never losing the arresting core sound they create. There are few, if any missteps here. Listen up.