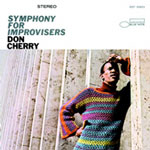 By September of 1966, the so-called "free jazz" movement was in full swing. It had been nearly six years since Ornette Coleman's highly controversial landmark residency at the Five Spot. Cecil Taylor had recently been pushing the limits of jazz with records such as Unit Structures and Conquistador. Albert Ayler's watershed, Spiritual Unity, had already shown just how completely the bounderies of jazz could be obliterated. By this time, even John Coltrane had abandoned his classic quartet, along with commercial acceptance, and forged into the fringes of free jazz in his pursuance of sound. All the rules of the jazz orthodoxy had already been broken. However, Symphony For Improvisors, Don Cherry's fifth date as a leader, reveals that his work was more akin to an earlier form of jazz: bebop.

Listening to Don Cherry's output with Ornette Coleman reveals a trumpeter steeped in the bebop tradition. Fully acquainted with the idiom, even at his freest, Don Cherry's playing retained a sense of order more akin to Charlie Parker than Cecil Taylor. It comes as no surprise that the recently reissued Symphony For Improvisors has many features common to bebop-oriented music: a walking bass line, a steady pulse, and moreover, individual solos with rhythm section backing, as opposed to collective improvisation. The opening movement of Symphony For Improvisors (titled "Symphony For Improvisors") is a veritable tour de force of group improvisation, but "Nu Creative Love" (along with the rest of the record) is more contiguous with bebop than the music of Albert Ayler. The primary reason behind the traditional nature of this record is the steady, swinging drumming of Ed Blackwell.

A versatile drummer from New Orleans, Ed Blackwell is one part second-line syncopation and one part Max Roach. Many free jazz drummers, such as Rashied Ali and Sunny Murray, abandoned playing time in favor of totally free abstraction, but Ed Blackwell never abandoned his bebop roots. Even during a maelstrom of chaotic exploration, he always maintained consistent time. Like Don Cherry, Ed Blackwell kept one foot in the tradition while forging ahead with the other. Throughout Symphony For Improvisors his dualistic drumming brings unity to the opposing forces of free jazz and bebop.

While Symphony For Improvisors shares many attributes with bebop, it also features several trademarks prevalent in the work of Eric Dolphy, John Coltrane, Albert Ayler, and Cecil Taylor: The use of vibes, as opposed to piano (Karl Berger plays vibes on the first suite, "Symphony For Improvisors," piano on the first movement of "Manhattan Cry," and vibes on the remaining movements); the wailing, human voice-like sax playing of Gato Barbieri; screaming, gurgling, alien saxaphone work akin to Albert Ayler's inventions (Pharoah Sanders plays flute on the first suite, but returns with a vengeance on tenor during the third movement of "Manhattan Cry"); and collective improvisation (on "Symphony For Improvisors" and "Sparkle Plenty"). In spite of the more traditional bebop nature of Don Cherry's overall approach at the time, his choice to surround himself with some of the more adventurous players of the day insured that his work would test the limits of his background.

Symphony For Improvisors belongs to a unique category of music called free bop that shares aspects of bebop and free jazz. Firmly rooted in bebop through the syncopated beats of Ed Blackwell, it simultaneously embraces free jazz through the fiery playing of Pharoah Sanders and Gato Barbieri. Like Ornette Coleman's landmark recording Free Jazz, Symphony For Improvisors sounds free-wheeling, happy, and very beboppish. Hindsight is 20/20, but it seems ludicrous that Don Cherry's music was ever considered un-melodic, un-musical, or even un-listenable. Symphony For Improvisors is a testament to his musicality, melodicism, and infinite listenability.