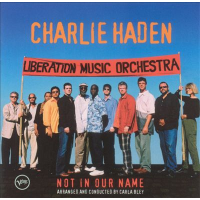 They say resistance is futile. But for many Americans, it is also part of being a patriot. Have you noticed, for example, that nearly a year after the election, most people have yet to remove their John Kerry bumper stickers? This homegrown opposition should adopt the title of Charlie Haden's new Liberation Music Orchestra recording, Not In Our Name.

Haden, a consummate timekeeper, formed his LMO with Carla Bley in 1969 to record revolutionary songs from the Spanish civil war and his own "Song For Ché. The orchestra recorded again on The ballad Of The Fallen in 1982 for ECM and at the 1989 Montreal Jazz Festival—The Montreal Tapes and Dream Keeper (1990) for Blue Note.

Haden's music, and the LMO, has always been folk music—a jazz of the Americas both North and South. This is apparent on this recording as well as his early-'60s work with Ornette Coleman.

With Carla Bley back arranging and conducting, this edition is all the more special. The quiet opening of Steve Cardenas' guitar ushers in a swell of waltzing horns. Bley certainly has a knack for keeping themes well contained. Their treatment of "America The Beautiful starts where Ray Charles left it many years ago, with a bit of blues inflection. The LMO then departs for a bit of military march that gets countered by Miguel Zenon's Bird imitation and off they go. Haden and Bley's beautiful America has pieces of the "African-American National Anthem, Ornette's "Skies Of America, and "Dixie tossed in for good measure. The LMO's melting pot has no Haliburton spoons.

Pat Metheny's "This Is Not America is served with a reggae beat and simple piano theme, while Bley's "Blue Anthem nudges the military drummer away from his beat and into a more reflective mode. Likewise, the band renews "Amazing Grace with Haden's large-toned solo, plus Curtis Fowlkes' and Steve Cardenas' full-throttle trombone and guitar attack. Haden's fragile "Throughout is rendered lovingly by the full ensemble, and Samuel Barber's "Adagio leads us out with tender care.

Visit Charlie Haden on the web.