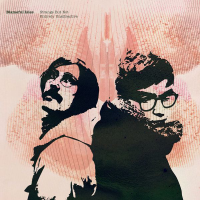 Essentially a one-man-band based in Sweden, Blameful Isles is one of many artists who are actively rediscovering and re-processing the sounds of the early jazz-rock movement of the 1970s. Overall, the ongoing re-vitalization of jazz-rock and fusion has been a really good thing. For audiences of a certain age, the mere sound of a real Fender Rhodes piano or mini-Moog evokes waves of happy nostalgia. The marriage of vintage sounds with 21st Century chops, if executed with taste, can be a wonderfully energizing musical experience. Yet, despite the use of authentic instruments and effects, and the implementation of analogue recording techniques, it seems as if most of the present-day artists dabbling in jazz-rock or fusion have forgotten about the highly experimental nature of this music. At its point of conception, jazz-rock was definitely not a commercially driven synthesis. What followed was a creative flowering that sprang forth from the seeds planted by Miles Davis, The Fourth Way, Weather Report, and Tony Williams' Lifetime. A lot of energy came into jazz-rock from the progressive rock (e.g., Frank Zappa, Soft Machine, Gong, etc.) and avant-garde jazz communities, as well. This is often forgotten in the rush to record another amazing guitar solo in 15/16, though it's hard to imagine the existence of a classic album such as Julian Priester's Love, Love (ECM Records, 1974) sans the inspiration of Priester's former employer, Sun Ra.

Daniel Israelsson, the main dude behind Blameful Isles, really gets the experimental, exploratory thing. This is what makes Strange But Not Entirely Unattractive such a rewarding musical experience. He has kept the true spirit of discovery and invention squarely in his sights. His third album under the Blameful Isles monicker, Strange But Not Entirely Unattractive, is proof of his profound understanding of the form. Unlike a lot of those inspired by the sound and feeling of 70s electric jazz, Isrealsson eschews long jams and instrumental pyrotechnics. Which isn't to say he's short on chops: he and his bandmates have enough raw skill to make this music happen in all of its visceral glory. But rather than merely soloing at length over complex grooves, Isrealsson's prime directive is a happy marriage of his own sunny melodicism with the creative spontaneity and musical discovery heard on albums such as Bitches Brew (Columbia Records, 1970) and Soft Machine's Third (Columbia Records, 1970). This puts him in the same rarefied air as several other present-day bands exploring similar terrains; Fontanelle, Kneebody, The Cinematic Orchestra, and Jaga Jazzist to name a few.

The manner in which individual tracks on Strange But Not Entirely Unattractive fade in and out, or crossfade to completely different sound fields—and the credits given to sound editing on the album cover—suggests that what appears on this album are extracts of longer jams and compositions. Normally that's a bit of a no-no, but Israelsson's Teo Macero-like skills in this arena result in a completely satisfying end-product. The overall sound here emphasizes tight, jazzy drumming, an array of analogue keyboard sounds, and warm no-slap electric bass. Interspersed are bursts of saxophones, rapid-fire off-kilter rhythms, a goofy melodica or two, waves of cosmic synthesizers, a few samples, and some very tasty Hammond B-3.

Originally from the instrumental hip-hop world, Israelsson has now moved completely into live performance with Strange But Not Entirely Unattractive. Clearly a more tightly-conceived and organic album than its quite worthy predecessor, Then It's Not The End (Urban Waves / HHV Records, 2014), there are no drum machines or programmed rhythms at all. Completely original in terms of sound and construction, Israelsson's music is equally inspired by the so-called "spiritual jazz" sounds of Alice Coltrane and Pharoah Sanders and the off-kilter prog-rock sounds of Zappa, Soft Machine, Ash Ra Tempel, and Egg. It's an unlikely fusion, but one that sounds and feels genuine and utterly contemporary.

Bottle Up, Balthazar; Lullaby For Little Krampus; Not All There; Tipping Point; Mountains Of The Moon; Gestures Of Our Younger Selves; Mutual Tongue; Bats In The Belfry (Get The Hell Out).