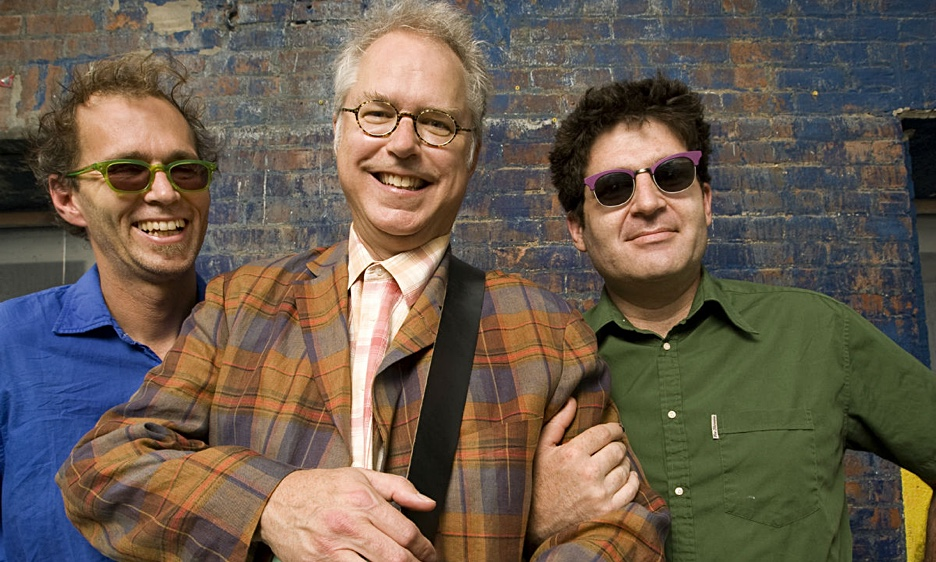 It was a swift return to the National Concert Hall stage for Bill Frisell, following his guest appearance in May 2018 at the finale of fiddler Martin Hayes' residency. This time Frisell was leading his trio of Tony Scherr and Kenny Wollesen, long-time collaborators in the guitarist's on-going quest to celebrate music without borders. This concert was just that—a celebration of music pure and simple, drawn from far and wide.

Frisell is more often than not labelled as a jazz guitarist, and to be fair, it's a hat that fits snugly enough. He has, after all, played with Jim Hall, Elvin Jones, Paul Motian, Joe Lovano, Dave Holland, Jack DeJohnette, Lee Konitz, Paul Bley, Andrew Cyrille, Ron Carter, Charles Lloyd—the list goes on and on and on...

Jazz vocabulary for Frisell, however, is only one part of a universal language. No less important in Frisell's musical DNA are folk, country, blues and African roots. Running in his veins too, are the formative pop songs, film scores and TV themes he grew up with in the 1950s and 1960s. All these influences inform Frisell's sound, his approach and his set list at any given time. The Dublin set opener, for example, bled from a slow blues into the expansive, American pastoralism that is one of Frisell's most evocative calling cards. For Frisell, it seems, all musical styles are kissin' cousins.

Before a full if not quite packed auditorium, as genres blurred so too did the edges of tunes, the guitarist's loops melting the tail of one number before a mere handful of notes steered Scherr and Woolsen into a new playground.

Of Frisell's many working groups, this trio with Wollesen and Scherr is arguably Frisell's most flexible vehicle. After twenty years or so of playing together, the trio could play this music blindfolded, yet Scherr and Frisell faced each other for the entire gig, the undemonstrative guitarist tethered on the spot to this pedal board, the bassist moving to the music in a slow, trance-like dance. All three musicians responded to each other's push-and-pull with ever-open ears.

In a delightfully meandering set, it was but a short, seamless hop from understated folksy stroll to a knotty rendition of Thelonious Monk's "Epistrophy," or from laid-back, Wes Montgomery-tinged blues to the brushes-steered balladry of John Lennon's "In My Life."

On this latter number, from Frisell's Lennon tribute album All We Are Saying (Savoy Jazz, 2011), the Baltimore-born guitarist pulled out some of his most sparkling guitar work of the evening, as the trio briefly soared. When the final notes were fading like dying embers, Frisell added a little kindling, gently conjuring "Shenandoah." Even on this most bucolic of American anthems, Frisell toggled between caressing lyricism and rocking exclamation with deceptive grace.

The trio's unabashed joy in the grooving country-rock of "That Was Then" gave way to more mellow meditation in the jazz-tinged waltz "What the World Needs Now," a song as relevant in today's mixed-up world as it was in the mixed-up world of 1965. This Burt Bacharach/Hal David song in turn, fed in and out of the Malian desert blues of "Boubacar," from The Intercontinentals (Nonesuch Records, 2003). That album, with its vibrant West African, Brazilian and Greek colors, remains one of Frisell's most outward-looking, and satisfying statements.

An animated standing ovation was rewarded with an encore. The James Bond theme "You Only Live Twice" gave way to the gospel song-turned protest anthem "We Shall Overcome," which in turn bled into the Disney classic "When You Wish Upon a Star." In most other hands such a musical collage might sound like pastiche or plain twee, but it's Frisell's ability to mine the simplest of melodies for their inherent beauty and drama—whatever their provenance—that makes him so unique, and so deeply appreciated by his peers and fans alike.

This gently rendered triptych of an encore, so vociferously received, crowned an uplifting performance on a nostalgic, yet hope-filled note.