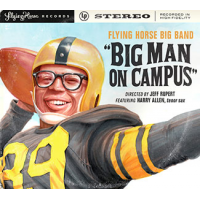 The band's music director, Jeff Rupert, composed and arranged the shuffling "B.M.O.C." and picturesque "New Creole Love Call," Michael Philip Mossman the invigorating "Partido Blue." Completing the program is Alan Hawkshaw's gritty "Move, Move, Move" (underlined by Mudel Honore's dancing Hammond organ). Allen's "Can You Love Once More?" sways to a charming Latin beat, as do "Triste" and "Partido Blue" (the last taken at a moderately faster tempo complete with whistle and other sound effects). Allen also wrote and arranged the lyrical waltz "June Song," the jaunty "This Is My Lucky Day" (not the standard of the same name)," the aptly named "Lonely Breeze" and "The One for You," which scurries breezily along, Basie style, with Honore's organ once again setting the pace.

Besides Allen, soloists of note include trumpeters Alex Lewis (flugelhorn on "Creole Love Call") and Josh Toler, alto Josh Stribling, tenors Andy Garcia and Gabriel Wallace, trombonists Lentzy Jean-Louis and Christian Herrera (both on "Raincheck") and guitarist Ryan Waszmer. Rupert made sure the FHBB was well-rehearsed and ready to soar, and there are no audible missteps to report (bassist Luther Burke is outstanding on "Raincheck"). Those who have heard Allen before will know pretty much what to expect from that precinct, as he is one of the Big Three among American neo-swing saxophonists alongside Scott Hamilton and Ken Peplowski. Eloquent and at ease in any context, Allen is especially captivating on "June Song," "Lucky Day" and "Raincheck."

Big Man or no, the UCF campus was rocking when Harry Allen came to town, a notion that is clearly affirmed by this splendid recording. Kudos to everyone involved.